The layoffs this week of about 30 percent of The Commercial Appeal’s newsroom by its corporate parent Gannett Co., Inc. are a blow to the city. Memphis has lost more than the sum of the news men and women who work so hard to bring us the stories that shape our lives, it is also in danger of losing a foundational part of its grip on local living history.

Having spent most of my career in the corporate world, I’ve seen this play before. Laying off talented and essential in-the-trenches personnel while promising to “create a unique statewide reporting network” is another way of saying “we’ve cut costs and increased shareholder profits by spreading the people we have left over a more vast playing field across all customer sectors (Tennessee) with our branded, Gannett, USA-Today way.”

What will be lost is both in-depth and wide local coverage. With respect to the CA’s chief editor Louis Graham’s Thursday Letter From The Editor, no matter how they slice or frame their “historic transformation,” I challenge Gannett to deny that reporting here in Memphis will be greatly diminished, not just in arts and entertainment, society, political, and crime reporting, but in the beat and investigative reporting that is so crucial to keep our local businesses and government in check.

Further, the “USA Today Network-Tennessee” corporate mission risks delivering the news to Memphis the same way it would to every other city in the state. That sounds reasonable only if you don’t understand the difference between Knoxville and the Mid-South. Gannett is headquartered in Tysons Corner, in the Greater DC/McLean area in Virginia, and I’m quite certain employees at Gannett would bristle at the assumption that metropolitan McLean should be handled the same way as rural Roanoke.

But also at risk is coverage of today’s Memphis history.

A large part of StoryBoard Memphis’ mission is to bring history to life. The stories told here come from many sources, but most of them could not be told, referenced, or validated without the archives of local newspapers including The Commercial Appeal and the old Memphis Press-Scitimar, which shut its doors in 1983. The stories in these papers, retained by Rhodes College, the University of Memphis and the Memphis Public Library among others, would have never been told without the hard work of the folks in the newsroom and the beat reporters of the day.

Reporters like Lawrence Buser, the Commercial Appeal newspaperman who isolated himself in the newsroom to meet his deadline on August 17, 1977, to capture the cold hard facts for the next day’s front page story, “Elvis Presley died Tuesday, apparently after a heart attack, at Graceland Mansion.”

Or CA photographer Bob Williams, who was sent down to Oxford in the fall of 1962, and undeterred by rioting and three days without sleep, documented James Meredith’s famous walk at Ole Miss as the university’s first black student.

Or CA reporter Thomas Fox, who was dispatched to St. Joseph Hospital on an April evening almost 50 years ago, getting close enough in the ER to witness Dr. Martin Luther King as he lay still on a stretcher, a resuscitator and an oxygen mask keeping the last desperate chances of hope for Dr. King alive.

These snapshots came straight out of The Commercial Appeal’s archives, and last year’s wonderful “175th Moments” issue for their big anniversary year. 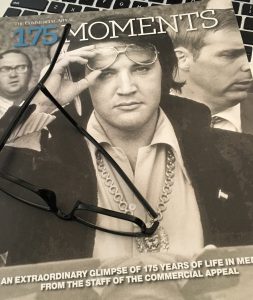 If not for the professional reporting of these men, and the hard work that goes on behind the scenes of a newspaper, moments like these would not have been captured in all of their truths and the history would be lost. Sure, in today’s world we have witness after witness documenting events in real time on Instagram and FaceBook, but really, we’ve heard that tune before, and it doesn’t ring true. The “reporting” captured in the social media quagmire is precisely why we need in-depth, factual, investigative journalism to stay informed.

It was after all newspaper men and women who informed the country to civil rights abuses, exposed the atrocities of the Vietnam War, and uncovered the Watergate scandal.

We all feel sorry for the folks who lost their livelihoods. A life devoted to reporting is a passionate and dedicated one, and the loss of purpose may sometimes eclipse the losses of income. Their losses are ours and Memphis’ as well. The void they leave will be immeasurable. A city such as ours, with a population as diverse as ours, with politics and issues as complicated as ours, requires responsible community journalism. Aggressive, strong local news coverage on the street, in the board rooms, at neighborhood hearings, and on foot, with the kind of in-depth reporting that cannot be delivered by the sound bites of the television news or the generalization of Gannett’s statewide reporting.

The reporting of today’s events become tomorrow’s documented history. And as Winston Churchill once said, “Those who fail to learn from history are doomed to repeat it.” Absent accurate records of Memphis events now, are we dooming future Memphians to repeat the mistakes we may be making today? How are future generations to understand the history that we are shaping today if it is not accurately reported?

StoryBoard Memphis is not a daily newspaper, and cannot replace what The Commercial Appeal has given to Memphis. But we will strive to fill some of the voids left by these losses. And we will do our part to uphold the integrity and coverage of responsible journalism so that future generations may hopefully learn from it.

This editorial first for StoryBoard reflects the opinions of its founder and lead editor, and not necessarily the views of its independent contributors.