“Stories. Ideas. Designs For How We Live.” 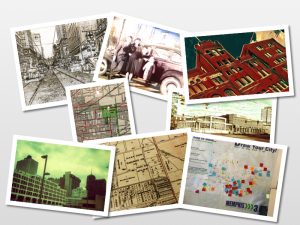 “I desire no future that will break the ties of the past.” ~George Eliot, a.k.a Mary Anne Evans

“Those who fail to learn from history are doomed to repeat it.”  ~Winston Churchill, British statesman, to the House of Commons in 1948

“The past is never dead. It’s not even past.”  ~William Faulkner, Southern author, from “Requiem for a Nun,” published 1950

StoryBoard uses collaborative storytelling to continually ask the central question: What Makes Memphis, Memphis? In re-examining Memphis’ glorious and painful pasts, in putting under a microscope the decisions and planning taking shape today, and in exploring possible futures for our city, month after month StoryBoard will return to that which makes Memphis unique.

Filmmakers use storyboards to sketch out and organize their film before going into production – before hiring actors, before hiring crew, before gathering equipment. Film production teams use these blank comic-strip-like boards to flesh out and realize scripts, to visualize on paper and bulletin boards a story that once lived only in a screenwriter’s head. Storyboards can be as rudimentary as drawn stick-figures against barely-realized landscapes, can look like classic comic strips, or can be elaborate shot-by-shot mosaics that are works of art on their own.

Storyboard rooms are not solitary affairs – they are filled with artists and their unique perspectives, applying their unique contributions.

StoryBoard Memphis does the same. But instead of producing a film we are telling Memphis’ unique story. Exploring and reimagining its past and its possible futures, and continually asking, Is this Memphis? Is that Memphis? How do we see the evidence of past events as they inform today’s Memphis? And are making those important connections to enrich Memphians’ lives?

Drawing on collaborations from writers, essayists and historians; from photographers, painters and sketch artists; from podcasts, videos, virtual streetscapes and maps. We deliver Memphis’ history in multiple ways and multiple mediums sure to reach everyone craving stories, in forms unique to their interests.

Why stories? Why history? Why now?

With some healthy growth, development and revitalization the last few years and with the continuance of Memphis 3.0 – the first comprehensive city plan in decades – Memphis is anxiously idling at the green light of a new open road. It has traversed bumpy and littered and bloody roads that are now, mostly, in its rear-view mirror. While neighborhoods and businesses are thriving and developing along corridors that run from South Bluffs to the Pinch District and from The Edge to the 240 at Poplar, many neighborhoods south and north continue to struggle: with poverty, with blight, with economic stagnation, and in some cases, with a complete absence of self and hope.

The stories of all of these perspectives need to be told, taken out of the history books and class rooms and into our present-day awareness. Many of these stories may be well-known, maybe even common knowledge to long-time Memphians, but some of these stories have only been told in barrooms or living rooms or at our grandparents’ dinner tables, stories that have shaped Memphis history in ways not yet realized. It is the hope of this publication to capture these hidden narratives in addition to those widely-known.

“Our Past is Our Greatest Asset”

It has been said that our past is our greatest asset. Stories not only help us shape our vision of the past, but also have the power of profoundly changing our future. One has to look no further than their own family history to understand this power to transform our attitudes. Who among us, in finally hearing about a closely-held family secret, has not been forever changed in learning such never-before-heard truths? They can be life-altering. And it is StoryBoard’s belief that by ignoring what came before, a thorough conviction and vision the future is forever and unknowingly blurred.

Re-examining history can be also be redeeming. In November of 2016 a few former Black-Panther-inspired activists attended an Indie Memphis screening of the film “The Invaders,” which shined a new light on the role these activists played in the 1968 protest marches and rioting that preceded Dr. Martin Luther King Jr’s assassination. The truths of their story had never been told, and according to patrons who were present at the screening, these men – now post-retirement age – stood and applauded the film. One of them said “we feel vindicated.”

Though not all of StoryBoard’s stories will have such redemptive powers – many will be light and fun and filled with nostalgia – they all will strive to be engaging. They will aspire to bring history to new audiences in creative ways that tap into our most basic cravings for stories.

StoryBoard’s contributors are made up of a cross-section of Memphis influence and professions. One is a historian. Another is a city planner. Another is a Southern fiction writer. Another a memoirist. Still more contributions will come from local and national digital publications that will for the first time be seen in print: High Ground News; Strong Towns; Smart City Memphis; Memphis Type History; the Memphis Heritage Keystone newsletter. Together they are made up of historians, anthropologists, filmmakers, artists, photographers, writers, bloggers, publishers, city planners, retired firemen, neighborhood leaders, and children too. StoryBoard is truly a forum for Memphis.

Stories come in many forms, and StoryBoard aims to bring them together in one space. A place to dream of not just our city’s past, but about our future; to re-visualize, reimagine, and re-contextualize our city’s possible horizons. It’s a place where creative ideas can be tossed onto a community bulletin board. A place where planners and artists and citizens can visualize their ideas for their city, past and future.

Join us on this exhilarating journey at StoryBoard Memphis. Help us answer, again and again, What Makes Memphis, Memphis?

“I would best describe it as a community-wide monthly paper for all of Memphis.” 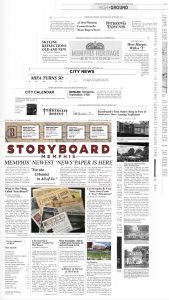