At the intersections of Cleveland Street, Central Avenue and Lamar Avenue, just outside of the Central Garden’s official western border, resides a neighborhood anchor and institution that in 1900 was nothing more than the far southern end of a bayou known locally as the “Sickle” – a swimming hole in the summer and a skating pond in the winter.

The University Club, known today by many members as simply “The U Club,” was started over a lunch conversation downtown at the Chickasaw Guards Club in 1907 between Nash Buckingham – a famous Memphis sports writer and outdoorsman – and John Bayard Snowden of the prominent Memphis Snowdens. The two men discussed the fact that Memphis did not have a university club.

It was a trend that began late 19th century in the U.S., when any man who could claim to be a true gentleman would join a club of like-minded men who shared common pursuits, politics or backgrounds. One such type was based on a local and highly regarded university.

These clubs were social gathering places that “reflected the high social esteem in which a university education held.” Mr. Buckingham and Mr. Snowden thus drafted a charter for their new club, and invited to the new club eight other unmarried young men who were also college graduates.

(Of course, for the better part of over seven decades these clubs were exclusive: white men only who were members because of their status in social circles. Those days of exclusivity are long gone. And today the Memphis University Club is an all-inclusive, family-oriented gathering place complete with a first-class restaurant and lounge, a library and meeting rooms, dining rooms and a ballroom, fifteen tennis courts and a large swimming pool for those hot muggy days of summer.)

According to the book Central Gardens – Stories of a Neighborhood, the men “launched their club with a dinner dance at the Gayoso Hotel in the fall of 1907. The membership grew, but activities dwindled during World War I. The University Club was rechartered in 1919 and leased five rooms of the Napoleon Hill mansion on the (northeast) corner of Madison and Third.” (The Napoleon Hill mansion occupied the site until 1929, when it was demolished to make way for the Sterick Building.)

In 1924 and in need of more space, the men planned to establish new headquarters in what was then known as the Dillard Building, on the northwest corner of Second and Union. However about four miles southeast, south of that area known as the “Sickle,” a large estate complete with a tennis court and a large swimming pool was for sale. 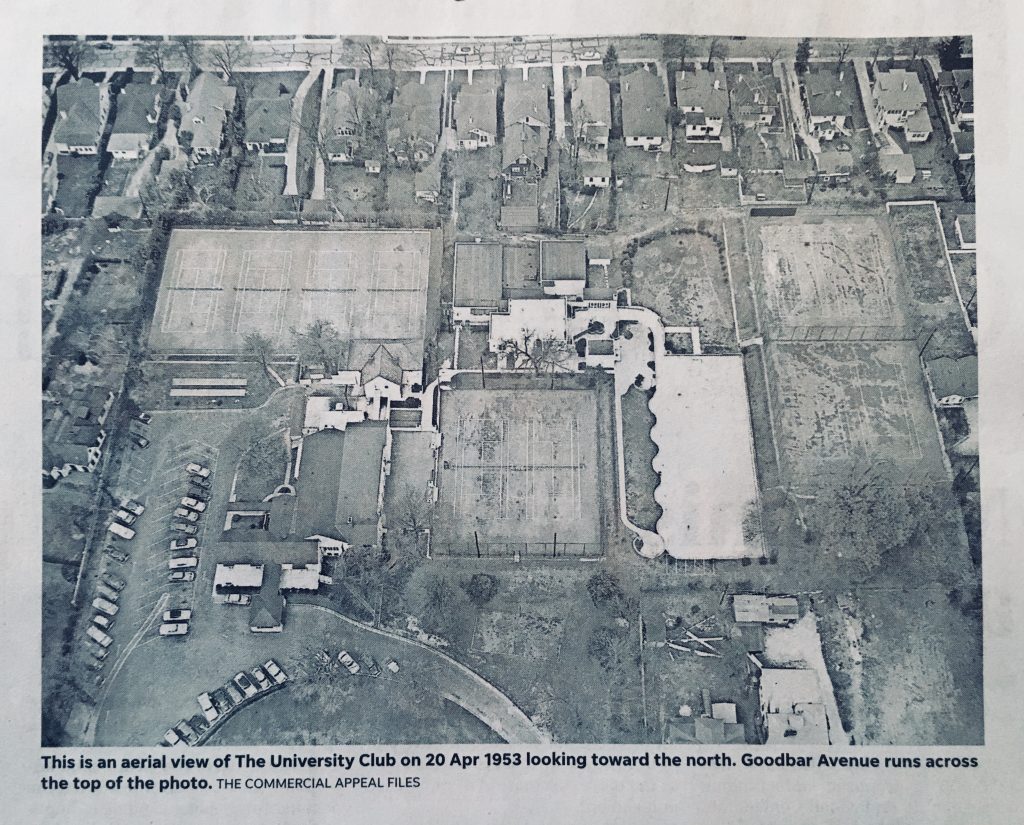 The owner of the estate at 1346 Central Avenue was none other than Clarence Saunders, the man who started the grocery revolution with his Piggly Wiggly stores. Before he built his famous pink Georgia marble “Cla-Le-Clare” mansion, aka the Pink Palace, Mr. Saunders’ residence was located at this intersection of Lamar and Central. Here his family enjoyed a bowling alley, that tennis court and that pool, whose water was pumped in from artesian wells.

The Club purchased the property from Saunders in 1925, and three tennis courts were added on the north side. After a fire had consumed parts of the original clubhouse in 1934, it was reopened with a gala in February 1935. The new clubhouse was described as “one of the most complete and modernly designed club structures in the South.” The ballroom was the second-largest in Memphis. The library – from Saunders’ original estate – was saved, and it remains in use to this day as a meeting room just inside the main entry doors on the building’s southwest corner.

As the club grew and thrived into the 1930s and ‘40s it became noteworthy for making tennis history in the South in 1936, when it hosted the very first National Clay Courts Championships. It also hosted the old Dixie Invitational Tournament, which made Memphis the capital of the tennis world for one week each spring.

But it is that swimming pool and its location that may have had the deepest roots. Back to the turn of the century, to the days before the estate, before the clubhouse, before the library, before the tennis courts, when it was still at the southern end of a bayou and a swimming hole and wintertime skating pond, it was a favorite spot for a young – later to be co-founder – Nash Buckingham.

Nash Buckingham was a beloved outdoor writer, an outdoorsman, a ball player, and famous for many exploits. Nash was one of Natch’s first handlers, the small bear that served as a baseball mascot and that later became the feature attraction at the northwest corner of Overton Park before it became the Memphis Zoo.

Young Nash was in his late teens before the land at 1346 Central was developed into the Saunder’s estate, when the southern legs of Lamar Avenue was still called Pigeon Roost Road. Just up the road, about where today’s Peabody Ave. dips under Interstate 240 east of MLK Jr. Ave., a wide bayou ran south and east in a bend parallel to Pigeon Roost Rd. Resembling the wide curve of the blade of a sickle – an agricultural tool for crops – it became known as The Sickle. Its southern end stopped and pooled in the area around Central and today’s Cleveland St. and Lamar Ave.

Nash in his colorful writing said it was here that he learned to swim. It is not difficult to imagine the elder Nash, sitting at poolside long after the University Club had been built, spinning yarns about the old days. “In the winter we skated on it,” he once said. “All the way from the Sickle to where the University Club stands today.”

Another version of this article appears in the August, 2018 issue of Midtown Living.