This is the second photo essay in a series chronicling an important piece of Memphis history.

Crossing Peabody, past a vast and soulless parking lot, down the hill through the intersection at Beale, and across the street from a utilitarian parking garage, one finds the grace, elegance and modesty of the William C. Ellis & Sons Machine Shop, a block-long warehouse and machine shop that has stood since the days of yellow fever, serving the growing agricultural and transportation needs of the Memphis industrial renaissance after the Civil War, through the turn of the century and beyond.

As mentioned in last month’s introduction, the warehouses and shops of the one hundred and fifty year-old Wm C Ellis & Sons were sold late in 2016 to the Carlisle Group. As of this printing, most indications are that the developer intends to demolish the historic warehouse to pave way for parking, or as part of their high-rise One Beale development. (the Carlisle Group has not responded to a request for comment on this story)

The Commercial Appeal reported on its sale in November, 2016.

During the last few months, as various individuals weigh in on the building’s fate, a liquidation of sorts has been ongoing. Memphis’ Metal Museum gathered a number of pieces of machinery in the fall of 2016, crews from a local scrap metal dealer have purchased and have been hauling off various large machine parts and other items, a local antiques dealer has purchased and gathered sets of large foundry and other significant pieces, and the former ownership has gathered and hauled off personal family effects. 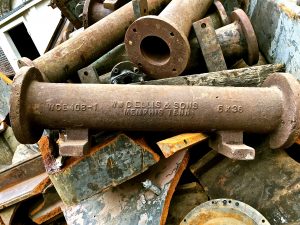 Yet as of this date there are still hundreds of tons of scraps left to be salvaged: large presses and milling machines; mounds of gears, pipes, and scrap metal around every corner; piles of century-old office supplies, paperwork and manuals in the main buildings.

After the scrap is gone, only a handful of folks around the Carlisles know what will become of the historic structure. This ongoing photo essay is a way of documenting and preserving what’s left. A love letter of sorts, it has been captured here by local photographers Mike Kerr and Thomas Woodley, along with the author. Archival photographs came from a variety of sources, as credited.

For this second installment, we’ll take you on a tour around the building, take a few peeks inside its windows and walls, and explore changes in the immediate surroundings over the years. (Photographs were taken between November 2016 and February 2017)

To step inside the yard of Ellis & Sons – or anywhere else in the complex for that matter – is to step back in time. It is jaw-dropping. It leaves one speechless, unable to put into words the sheer mass, variety, and tonnage of the machinery, scraps, dust, molds, boxes, paperwork, equipment – history – that surround every step, in every direction. It is almost as if it speaks to you, and you cannot help but to just listen.

To make a solitary walk under the archways and past the brick and the steel, one is not alone. No one is alone in this place. A lone worker long deceased and dressed in blue has been seen by many, observing the salvaging efforts and slamming doors. But ghosts or no ghosts, you can still sense the hydraulics kicking in, steam pumping through pipes overhead, furnaces burning hot, sledge hammers clanking away, and men working. Men. Working.

Memphis being built by raw hands.

Photographers Thomas Woodley and Mike Kerr are longtime Memphians passionate about capturing Memphis in all its beautiful glory. Thomas “photographs it all” and can be found on Instagram at @yesiwood. Mike Kerr goes by @f8inmemphis and does freelance work or print sales at f8inmemphis.com