“The corner store has a mythic place in our view of American cities. Mythic because, in most cities, they exist only in our minds.”

So says the Strong Towns blog.

When we think of the gold standard for the grocery store in the Mid-South, we of course think first of the chain of Piggly-Wiggly stores founded in 1916 by Clarence Saunders. However, throughout the 1920s and through the ’60s, little and lesser-known neighborhood grocery stores could be found everywhere before the big chains took over the landscape.

Memphis Magazine’s Ask Vance recalls that “You have to realize that years ago, before national chains took over the grocery industry here, it was commonplace to have small, family-owned and operated groceries, markets, and other stores scattered along the residential streets of this city. There was a very practical reason for that: In the first half of the 1900s, we employed a very novel means of transportation when we decided to go shopping: We walked. And so merchants opened stores in their own neighborhoods, and that’s where they drew their customers.”

In Midtown Memphis, quite a few family-owned or small-chain “cooperative” stores dotted the map for generations. Among others, midtowners could count on grocers in their neighborhood that included Leadway Food Stores and WeOna grocers, as well as smaller, neighborhood Piggly Wiggly stores.

Though Piggly Wiggly would eventually dominate the grocery store landscape, the chain started small. There were local stores in midtown at 622 S. Bellevue; at 2129 Central Ave on the corner at Cooper St, home for years of the former Toad Hall Antiques store; and at 237 Barksdale St, south of Union Ave near Linden.

Leadway was a cooperative of small, “Locally Owned” stores. The telephone book advertised Leadway as “Dedicated to service to customers. Fine foods at low prices.” In the 1940s midtowners could walk to Charlie Adams Grocery & Market at 2127 Madison, where Overton Square is now; to Hellum Brothers at 938 S. Cooper; to Short’s Grocery & Market at 637 S. Bellevue; and to Leadway #32 at 663 S. Rembert.

WeOna stores, as Ask Vance says, “was a citywide chain of individually owned and operated groceries — hence the name: ‘We Own a Store.'” WeOna stores could also be found all over midtown. At various times neighborhoods could find a local WeOna at 243 Barsdale St. (two doors down from a Piggly Wiggly); at 641-43 S. Cooper, operated as the L.J. Vescovo grocery, which is now home to Otherlands Coffee Bar; WeOna #73 at 2029 Peabody at Diana, a brick building renovated in the early ’60s that now houses offices; WeOna #16, B.E. Turner’s Grocery at 2129 Young Ave, where Cafe Ole is now; and WeOna #16 at 1605 Monroe, owned for over 60 years by the same family, the Mangiante’s.

Enjoy these little blasts from the past.

A residence for generations, this former neighborhood store in Central Gardens from 1927-29 housed the “Handy-Andy Store,” and from 1930-41 was owned and operated by a T. Benton Chalmer.

In later years it became part of the chain of Leadway Food Stores. Devin Greaney, local writer and historian added that “Stepherson’s owned it. Later they became Big Star and now (we know it as) Superlo.” This was listed as Leadway Food Store #32. 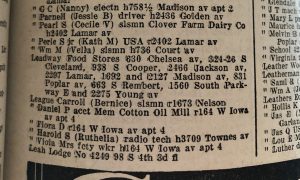 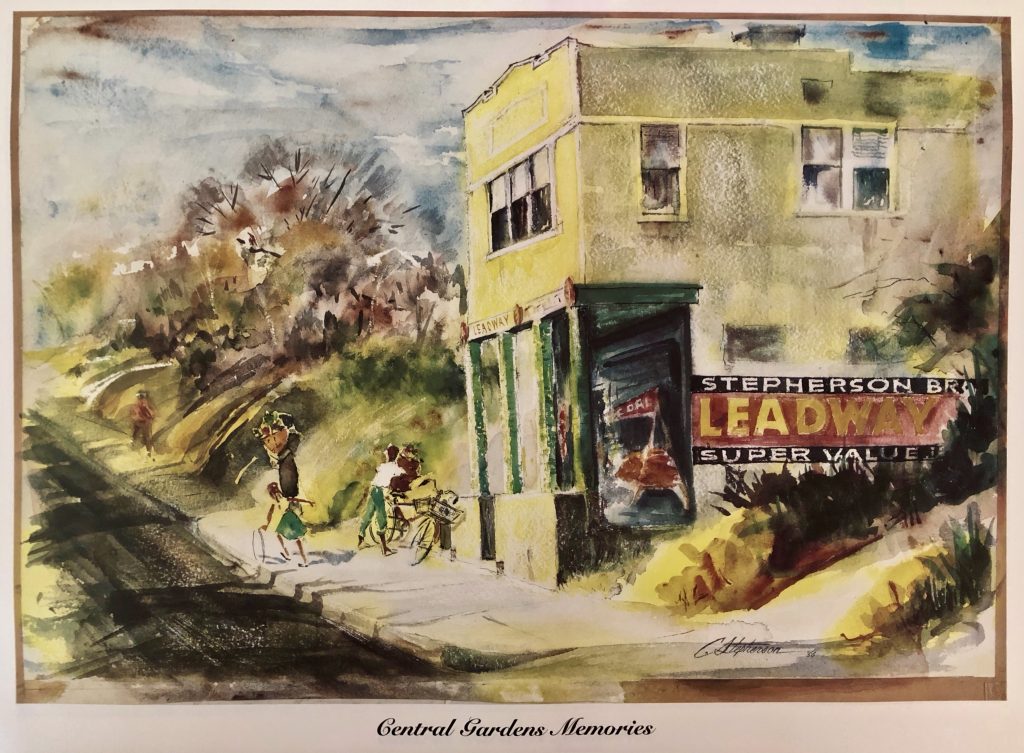 Central Gardens Memories, watercolor by C. Stepherson, which until recently was framed and hanging in the Superlo Foods grocery in the Audubon Place shopping center in East Memphis. This is a newly-restored print by Paulsen Printing, courtesy of Sue Ann Duffy of East Buntyn.

Reader Ruthie McAfee Cassin told us that “In my childhood, It was DiBandi’s Grocery. (60s). My dear friend and her late husband bought it and turned it into a home many years ago. She still lives there!”

4 Replies to “The Neighborhood Corner Store”