Like most other cities around the country, the 1920s were boom years for Memphis. Not only were major structures being erected vertically downtown, such as the new Peabody Hotel, Sterick Building and Columbia Mutual Building (later known as the Lincoln-American Tower), but the city was also undergoing a horizontal expansion to a degree unmatched in its history. One of the most enduring subdivisions in East Memphis developed one decade later, and dates from the 1930s: The Village.

The Village is seen on this 1949 Asbhurn map (below) on the south side of Poplar (the road highlighted in red), just east of Goodlett (the roadway separating the Memphis City limits in white on the left and unincorporated Shelby County in orange on the right).

J. Frazer Smith, architect, helped design the layout of the subdivision and many of its homes. The image below, from Memphis: An Architectural Guide by Eugene J. Johnson and Robert D. Russell, Jr. (The University of Tennessee Press, 1990), shows his vision for its development. Smith also designed the Central Park Subdivision (Rosemary Lane off of Central and Melrose in Midtown) at about the same time. 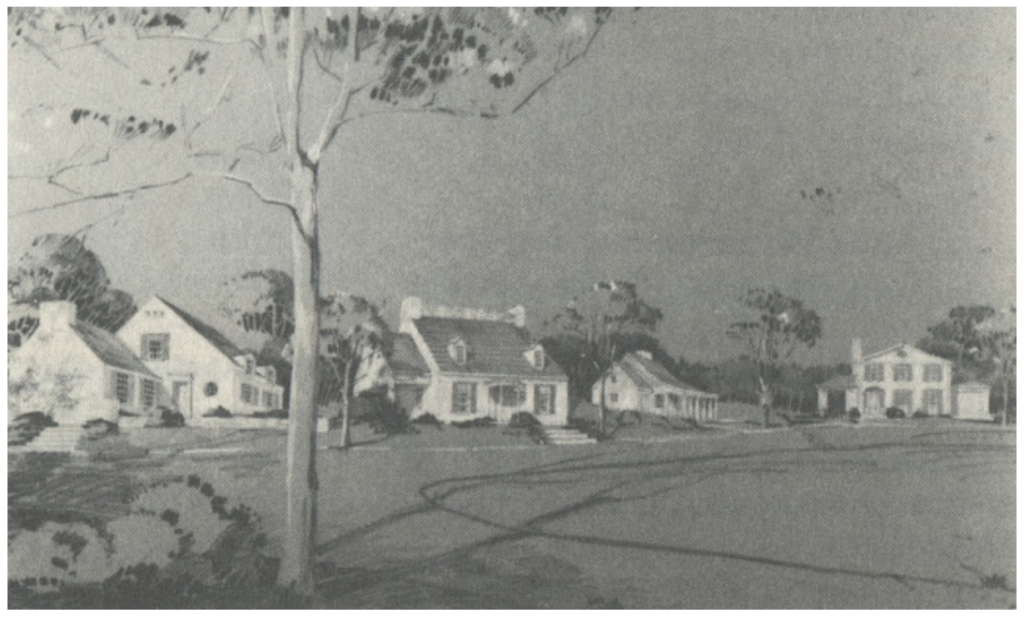 The main street in the subdivision is Williamsburg Lane, which reveals the predominant architectural style that Smith had envisioned for the development: Colonial. 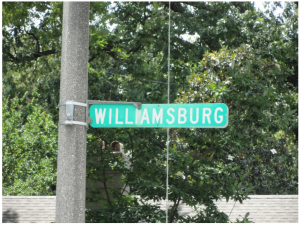 A late-1990s Memphis-wide Cultural Resources Survey, completed by joint efforts of Memphis Heritage and the Memphis Landmarks Commission, recorded a full history of The Village subdivision. Here is an excerpt:

The Village is a small, relatively secluded neighborhood in the heart of Memphis’ heavily trafficked Poplar Avenue corridor. Less than half a mile square, it lies in an affluent residential district situated between the commercial intersections of Highland and Perkins. The boundaries of the survey area extend from Poplar on the north to the Southern Railroad tracks on the south, and from Williamsburg on the west to Greenfield on the east. This boundary was determined by the 1938 plat maps for The Village subdivision, including its 1941 addition of Greenfield.

A series of low brick pillars marked with the name “The Village” line the unassuming entries to the subdivision off Poplar. Once inside, the neighborhood is characterized by its gently curving streets lined with a canopy of mature hardwood trees. As Grandview intersects with Williamsburg both streets grade into large S-curves, and Greenfield curves as it meets Grandview, giving the impression of a winding country lane.

All of the homes in the area were categorized by the surveyors as Minimal Traditional, a style generally used as a catch-all for suburban homes of the 1940s and ’50s. Most, following the Colonial theme of the Village, demonstrate strong Colonial Revival influence.

While the most obvious design element that differentiates The Village from other Memphis neighborhoods is the architecture of its homes, it is also notable for its landscaped islands. 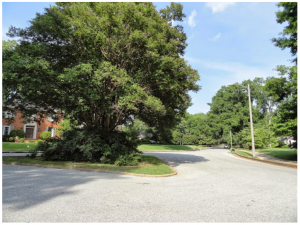 Below is the plat from 1939; the landscaped islands are located at the broad intersections where Grandview meets Williamsburg and Woodmere. The subdivision was originally approved by the Memphis Planning Commission on May 2, 1938, but was revised to reposition several utility easements by the Commission on August 23, 1939 (shown here). Note at the top of the plat both a “Poplar Avenue” and a “Poplar Lane,” the latter of which represented the section of the road that was widened as part of this development. Perhaps the developer was wishing that the homes on those lots would have a more bucolic-sounding address. 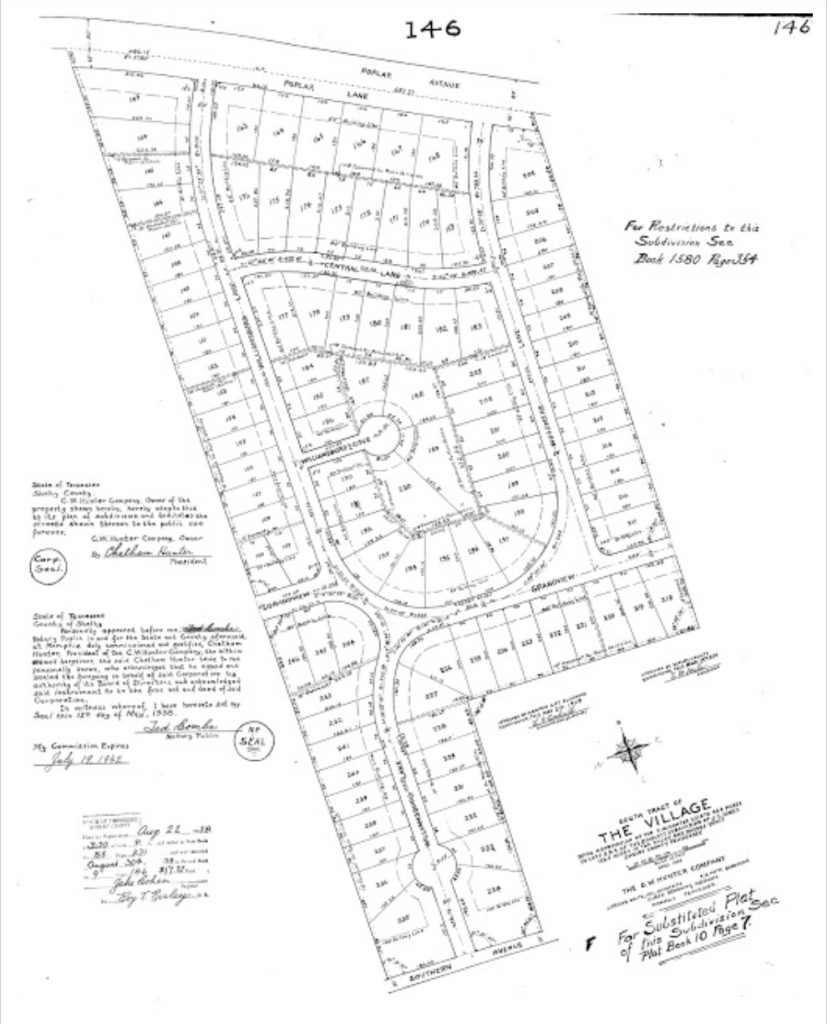 The 1938 aerial photograph (below), from the Shelby County Register of Deed’s website, shows the site just before development. The buildings to the southeast of the future subdivision, facing the railroad at the bottom of this photo, were home to the Wallace Sanitarium. Photographs and ads of the sanitarium can be found on the website Historic-Memphis.com. 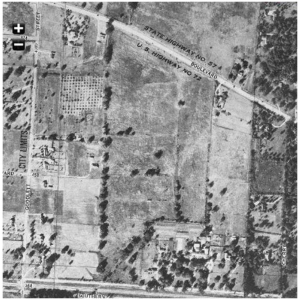 On September 8, 1938, in anticipation of its construction, the development team submitted a request to the Board of Adjustment to erect a sign advertising the project. Curiously, the sign the developers were requesting had a somewhat cartoonish quality about it.

After the subdivision was developed, of course, the advertising sign was removed. For many years, the subdivision signs were located on large brick markers at the entrances into the neighborhood along Poplar. Unfortunately, these markers were frequently struck by errant drivers on the narrow lanes of Poplar. Remnants of these brick markers can still be found today.

Today, the subdivision is marked by these handsome signs (below). 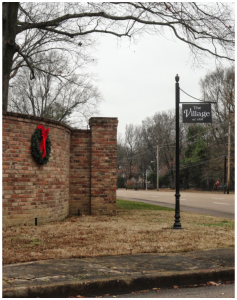 A sampling of the typical Colonial homes in The Village: 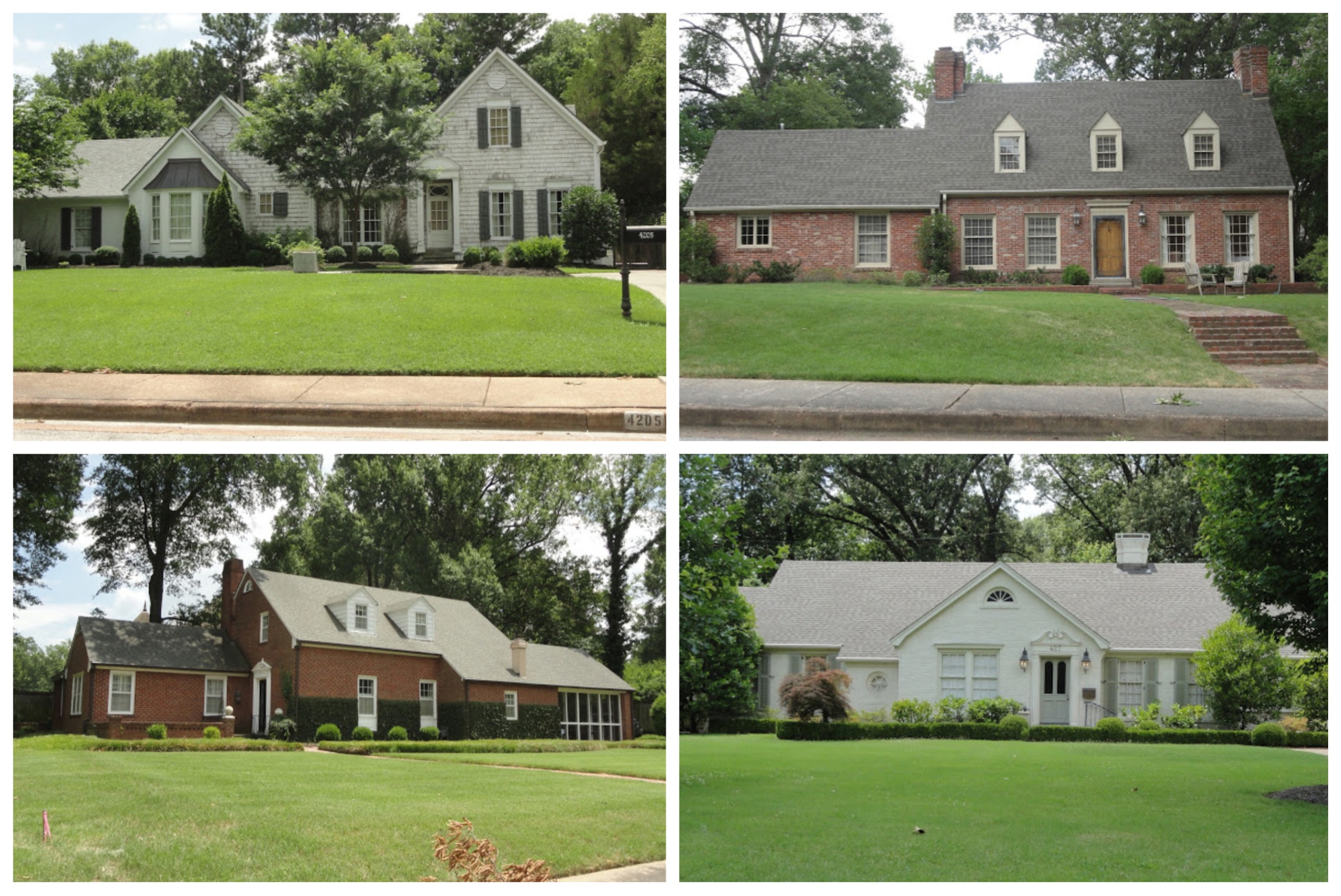 For more information on The Village, go to Memphis Heritage’s posting of the Cultural Resource Survey of The Village for a full history of the subdivision.

A version of this article was originally published in June 2016 for the blog Creme de Memph.

Josh Whitehead is a sixth-generation Memphian. Josh serves as the secretary to the Land Use Control Board, Board of Adjustment and Landmarks Commission for the Memphis and Shelby County Office of Planning and Development.  Josh has been published in law review journals on issues related to housing and blight, but is most active on Creme de Memph, the blog that features his take on Memphis’ design, history and architecture.