This month’s Central Gardens newsletter explores the 1975 turning-point decision that took the Central Gardens Neighborhood Association into the waning decades of the twentieth century.

In the fall of 1975 Central Gardens’ residents were sitting on the edge of their collective seats in waiting for the Memphis City Council and the Planning Commission to vote on neighborhood zoning changes as outlined by William S. Pollard Consultants, Inc. and their improvement plan. Neighbors in support of the plan – which included the creation of bicycle lanes, a walkway system, new street signs and entrance gates, and new parks and an educational center – saw it as critical to preserving the small-town and family-orientated integrity of the neighborhood.

Ms. Viser’s Stories of a Neighborhood quoted local attorney John Thomason, who said, “Hiring Pollard to develop this plan gave a lot of credence to the association. No other neighborhood had ever done anything like this.”

Opponents of the zoning aspects of the plan were few, and primarily from residents of an area in west Central Gardens near Cleveland Street, between Eastmoreland and Linden. Marjorie Diffee, an owner of a duplex and rental house in the area, was quoted in The Commercial Appeal as saying, “I don’t feel that those people who have all that money should zone us back to R-1. …We should keep the Midtown area for working people who can afford medium income housing.” (Stories of a Neighborhood and The Commercial Appeal 11-13-75)

However to the satisfaction of most of the neighborhood, the City Council and the Planning Commission approved the “back-zoning” to single-family and the Pollard plan.

“In supporting the zoning changes, the Planning Commission staff said this precedent-setting action would enhance investment in the area by restricting future development to single-family homes, would halt further deterioration of the inner city, and would encourage other mid-city areas to follow suit.” (Stories of a Neighborhood and The Commercial Appeal 11-13-75)

The decision gave residents the boost they desired to continue spreading the “fix-up” attitude throughout the neighborhood and through the 1970s. Combined with the support from the city, the upward trends and excitement of old house renovations brought more new buyers into Central Gardens, an influx not seen since the 1920s, that rejuvenated the neighborhood.

The renaissance brought in “middle to upper class people who represented a variety of professions – attorneys, doctors, artists, architects, teachers, bankers, politicians, and musicians. A new generation of politically influential citizens made Central Gardens its base camp. Young families were everywhere. When Judge Bill Leffler and his wife Florence moved to Carr Avenue in 1958, there was only one other young couple on the street. By the early seventies, Mrs. Leffler said there were 27 young children on the block. Attorney Walter Armstrong, his wife Alice, and their two children were among the young residents. Their yard man Hubbard lived in quarters above the garage and was the watchdog of the neighborhood. A fixture on the Armstrong’s front steps, he knew – and reported – everyone who came and went, and the neighborhood children flocked to him.” (Stories of a Neighborhood)

Originally called the Carr Avenue Fourth of July Bicycle Parade, many residents at the time could claim credit for having conceived “this enduring and endearing tradition.” From Stories of a Neighborhood:

“Whoever did (start the parade) is owed a great debt of gratitude for giving Central Gardens a tradition which brings the entire neighborhood together to celebrate. Taking place on Carr between Rozelle and Willett, the parade has become a huge event since its inception. Neighborhood children decorate their bikes, wagons, and tricycles to ride down the block, led by (now) mounted police and boy scouts from Troop 34 at Grace-St. Luke’s. The parade ends with a short speech by a local dignitary or political hopeful and the singing of the Star Spangled Banner.” 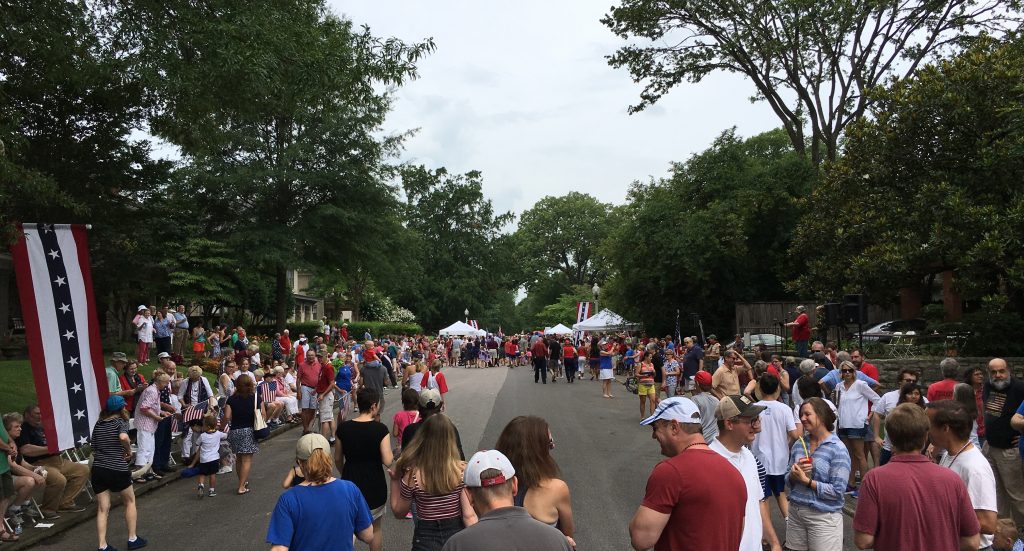 The annual Central Gardens Home & Garden Tour held its first set of tours in the latter part of America’s Bicentennial year, 1976. “Homes on Belvedere, McLean, Peabody, Willett, and Central have been featured, as well as those on smaller interior streets. Visitors are fascinated by the diversity in the size, style, and age of the homes on the tour. The tour has become one of the neighborhood’s best marketing tools, and it has been copied by other neighborhood associations across the city.” (Stories of a Neighborhood)

The 1970s were indeed a pioneering time of renaissance in Central Gardens, and laid the foundation for the conflicts that were to come in the 1980s. These conflicts would include mobilizing to deal with encroaching Memphis crime, and the continued battles for more appropriate and compatible land use that would eventually lead to the efforts to establish Central Gardens as a national historic district.

Join us in April to read about these important Central Gardens efforts.