This month’s Central Gardens newsletter explores the important role private security services played in the late 1970s that allowed the neighborhood to continue to flourish into the 21st Century.

It’s no bold statement to say that Memphis in the last fifty-plus years has had an ongoing challenge with crime. Started mainly in our urban neighborhoods Downtown, it was exacerbated with the murder of Dr. King and the 1968 riots, and with upswings and downswings over the years has continued to this day.

With Midtown and Central Gardens’ close proximity to Downtown and the more unfortunate areas of South Memphis, the affluent Central Gardens neighborhood has for many years been a target for robberies, break-ins and theft. This presented a particularly threatening problem to the growing prosperity the neighborhood was enjoying during its 1970s renaissance. 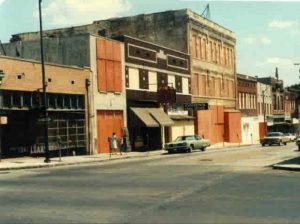 From Stories of a Neighborhood: “There is no doubt that life was on the upswing in Central Gardens in the 1970s, but so was crime. […] It was a prime target for just about every kind of crime, and police response at the time was slow to nonexistent.”

Cue neighbors Bill Craddock, Jim Williamson and Tom Givens to the rescue. On Craddock’s front porch on an evening in 1978, the three men discussed the escalating crime. Givens – who was a private investigator and owner of a small security service – came up with a simple yet innovative solution. “Hire your own cops,” he said.

Stories of a Neighborhood: “A few weeks after that conversation at Craddock and Williamson’s request, Givens brought a proposal for a neighborhood security service. With the strong support of the Central Gardens board, University Security Service began a one-car 24-hour patrol of the neighborhood in July 1979. According to Givens, Central Gardens had been experiencing a wave of residential burglaries, car thefts, and robberies.”

“The crime rate plummeted after we took over,” Givens said. “It was not unusual in those early years to make an average of ten to fifteen felony arrests per month. I am proud of the fact that in the ten years I was there we were never sued for false arrest or for using undue force. We were able to accomplish a lot that most people didn’t know about. We put several hundred criminals in jail and made a real impact on the quality of life in the neighborhood. Our service ended up being a model for several other neighborhood patrols across the country.” (Stories of a Neighborhood)

At its peak in 1983 there were three cars patrolling the neighborhood, street by street, house by house.

Today Phelps Security carries on the baton that Givens and company started almost forty years ago. Phelps was founded in 1953 and has been serving Central Gardens’s residents for many years. Their signature red pickups with the yellow graphics can be seen day and night patrolling the neighborhood’s streets. In addition, Phelps’ service in Central Gardens is unique in that they provide additional security measures such as vacation checks, mail collection, and even babysitter checks to their subscribers.

From Givens’ Universal to today’s Phelps, it can be argued that these innovative private security forces not only have protected Central Gardens from the spread of crime, but with the neighborhood’s position on the Memphis landscape may have buffered the rest of Midtown from the unfortunate fate of other older Mid-South neighborhoods. Residents have these innovations – and an evening conversation on a neighborhood porch in 1978 – to thank for the continued efforts that have allowed Central Gardens to prosper as it does today.

Stories of a Neighborhood can be purchased at Central Gardens Shop