(A version of this appears in the Central Gardens January Newsletter )

This month explores the origins of the neighborhood, from the original subdivisions and land use to the evolution of its land, its streets and early transportation.

Central Gardens and Memphis – The Land

When the residents of Central Gardens organized their neighborhood association in 1967, the neighborhood’s footprint and street grid were already well established. One has to travel back sixty to seventy years prior to that landmark year to discover how its layout and its proximity to Downtown Memphis made this neighborhood unique.

Prior to 1900 the land now occupied by stately mansions and pastoral avenues was not yet within Memphis city limits – up until 1899 the city limits stopped at what is now Dunlap Street in the Medical District – and the land, mostly undeveloped and still densely forested, was still owned by families with familiar names like Overton, Hewitt, Harbert and, predominantly, Rozelle.

From Central Gardens – Stories of a Neighborhood: “Solomon Rozelle had settled in Shelby County in 1815 on 1600 acres of wooded wilderness,” and his estate’s land sat between present-day Bellevue to the west all the way along Union Avenue and to East Parkway. It is said that Rozelle’s slaves, who along with his family cleared the wooded land, were the first African Americans in Shelby County.

Into the 1890s Memphis the city had only recently rebounded from years of yellow fever and the absence of a city charter, had quickly developed into a booming town being built by the industries of cotton and lumber, and had become a center for distributing grocery and dry goods, pharmaceuticals, and even livestock. Again from Stories of a Neighborhood: “Fortunes were made, and they were made quickly, creating a class of New Rich. Mansions soon lined the fashionable streets such as Vance, Linden, Union and Waldran, and the wealthy began to look eastward for residential property.”

Along mostly unpaved and graveled roads the open spaces east of Cleveland Street and south of Union Avenue were a relatively short one-hour commute from Downtown by horse and carriage, and the streetcars from Vance and along Peabody and Central avenues took more and more visitors and residents away from Downtown and into the newly subdivided land to the east, which was quickly being sold off by landowners.

Stories of a Neighborhood: “…sales were targeted at the newly rich. Exclusivity was a key selling point, and lots were sold only to those families whose position in society would add to the stature of the neighborhood.”

Most of the cottages and bungalows we see throughout the neighborhood and the elegant mansions we see lining Central and Peabody were built after the turn of the century, between 1900 and 1929, and the Gardens became “the newest, most prestigious neighborhood in the city, [ . . . ] far from factories, smoke, and railroads, offering an atmosphere of tranquility and charm, [where] balls and entertainment proliferated, business deals were struck, [where] the names of many area residents filled the pages of the newspapers and the Social Register.”

These rather distinguished beginnings established the rich heritage that is the Gardens today, and provided the foundations of what would one day become the Central Gardens Neighborhood Association. 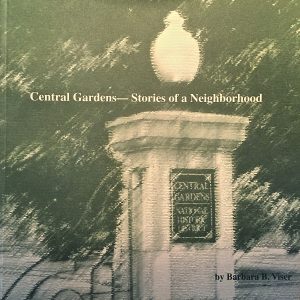