An early thanks for Thanksgiving, it came into my hands from the hands of a friend and fellow board member.

“You might find this interesting. Maybe there’s a story in it. Would you want to take a look at it?”

What was it? Nothing more than the original 1967 Constitution of the “Central Gardens Area Association.”

It came in a manila envelope. “Central Gardens documents” had been written in pen on the outside of the envelope. Inside, a set of documents was stapled and folder over, sealed in a plastic cover. Carefully peeling away the plastic, I unfolded the paperwork to its full 8 1/2 by 14-inch size.

On the first page at the top it read simply, CONSTITUTION. ARTICLE I.

The document was hand-written. In pencil. But was it really an original? Surely this had to be a good, xeroxed photocopy.

But at closer inspection, with a little light directed just right and an oh-so-gentle test with an eraser, it was confirmed:

The twenty pages I held in my hands was indeed an original.

The document induced chills. The finding was reminiscent of that discovery years ago of the first printing of the Declaration of Independence in the backing of a framed painting. Not nearly as valuable, but an unquestionable thrill.

Where had it been all these years? Central Gardens resident Jeron Smart, contacted by email, told us that he found it at an estate sale in “The Village,” the secluded, affluent neighborhood anchored around Goodlett Street and Central Avenue. Mr. Smart told us that the sale in question was for the estate of “one of the Schwamm sisters, Ann or Claire, who lived at 1616 Central Ave.” 1616 Central is more familiar to local residents as Clanlo Hall, the 1853 plantation house and one of the two oldest houses in Central Gardens, along with the Rozelle House on Harbert Ave.

As of this writing, we have yet to discover how many and whose hands have possessed the document in between 1967 and recent years.

In purposeful double-spacing the twenty-page document details the fundamental principles that would organize and govern Midtown’s newly-formed neighborhood, which as Article I-A states, “shall be (named) Central Gardens Area Association.”

The manner in which the entire document is worded certainly informs the time in which it was written. The Midtown landscape and times were indeed a-changing in the mid-sixties in Memphis. From Stories of a Neighborhood:  “It had been (in 1966) the immediate threat to destroy the beauty of Belvedere Blvd, the proposed removal of the tree-lined median from the boulevard, that had ignited the neighborhood to action. ‘This gave people a cause to rally around, and afterwards they felt they should go further (in establishing the association),’ said Happy Jones.”

(The late Dorothy Snowden “Happy” Jones passed away this November the 14th at the age of 80, eulogized here by the Memphis Flyer)

Continued from Stories of a Neighborhood:  “At the urging of resident and attorney Walter Armstrong, a core group of residents, including John Thomason, Katherine Smythe, Peyton Rhodes, and Janie Fort, formed the Central Gardens Area Association to oppose commercial ventures, high-rise apartments on Central, and the construction of duplexes and townhouses. Jean Marsh was the first president of the association named for its proximity to Central Avenue and its similarities to New Orleans’ famous Garden District. This was one of the first neighborhood associations in Memphis…”

The primary purposes of the Central Gardens association, as stated in Article I-B of the Constitution, are clearly in practice to this day. The document establishes the very principles the neighborhood honors today, expressing among its purposes a need to “maintain the quality and integrity of the homes located in the area and to preserve the historical quality of the area; to resist encroachment for commercial or other purposes upon the homes in the area.”

The document captured the neighborhood’s basic geographic borders at the time, which in some places differ from today: Cleveland Street to the west; Barksdale to the east; York Ave to the south; and Eastmoreland and Peabody avenues to the north. (Later neighborhood boards would expand the borders a block east to Rembert Street, and in 1991 the block north of Peabody bound by Barksdale, Linden, and Rembert.)

It also established the governing characteristics observed today: its membership guidelines; the officers of the association and the general duties of the board President, Vice President, Secretary and Treasurer; the board districts and makeup of the board of directors; and the board election process.

Finally, as part of the association’s bylaws, a standing set of committees was established.

These included Membership, Finance, and a Liaison committee “to keep in touch with City Planning Commission and Board of Adjustment,” and to monitor ”for any encroachment upon the area for commercial or other purposes, and to alert the members, officers and Board of Directors of any attempt to encroach upon the area.” A Legislative committee was established to enforce these Liaison duties.

The bylaws included a committee for Beautification. And there was established a Telephone committee, to “contact members with regard to meetings of association, attendance at the City Commission, Board of Adjustment or Planning Commission meetings.”

And lastly, a Historical committee was established, to “research, compile and publish a history of the area.”

More than anything, the document captures the makeup and the styles by which the neighborhood is governed today, as well as the formal and official qualities of the organization that have prevailed in its fifty years as a neighborhood association.

It accurately depicts the formation of the neighborhood’s very DNA, its physical constitution. Thankfully, the fifty-year-old document has been handled just as cautiously, and like the organization it established, just as judiciously. 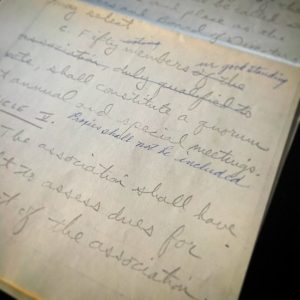 (A version of this article appears in this month’s Central Gardens newsletter.)