Editor’s Note:  Mud Island has seen its fair share of news lately, as Tennessee’s State Building Commission’s executive subcommittee approved the addition of Mud Island and the riverfront to the city’s Downtown Tourism Development Zone (TDZ) May 22, 2018. Recent plans call for the redevelopment of Mud Island River Park, which Memphis Mayor Jim Strickland said is “a major step forward in our momentum and in building a world-class riverfront – one that both Memphians and visitors to our city will enjoy.” We hope you will enjoy this first in a series on the history of Mud Island.

Mud Island: A History, Part I

Downtown Memphis is separated from the Mighty Mississippi by a spit of land known as Mud Island. The photograph below shows the southern tip of the island with the Hernando de Soto Bridge and Bass Pro Shops at the Pyramid in the background. The Mississippi River flows on the left, or west, side of Mud Island with the Wolf River Harbor on the right. Downtown is just out of frame to the right. This article, the first of a series, will take a look at the history of this little island that started off as nothing more than a sandbar.

The southern end of Mud Island is part park, part history museum, part music venue. A map from the 1923 Plan put together by Harland Bartholomew and Associates for the Planning Commission shows not only future roadway alignments, but also future parks. 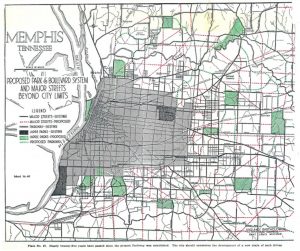 Most of Mud Island was indicated in the map’s Legend (left) as a future “large park.” In 1910, Park Commission Chairman Col. Robert Galloway proposed that Mud Island be a public park for the city’s African-Americans since at the time they could not enjoy city parks. The proposal was thwarted by Mayor E.H. Crump, who wanted such a park outside of the city limits. In 1913, the Parks Commission opened Douglass Park to black patrons just east of the Hollywood neighborhood, which was still outside of the city ten years later when this map was made (it is not shown on the above map).

The idea of placing more active recreational and entertainment activities on the island was first envisioned in the 1955 Plan for Memphis, authored for the Planning Commission by Harland Bartholomew and Associates. In the images below, we can see that a harbor would be placed where the mouth of the river was and still is, but much of the current Wolf River harbor would be filled in for parks, fields and an expressway. Just south of the I-40 bridge would be a sports stadium.

But the 1955 plan was audacious considering the history of Mud Island. An old property ownership map from 1884 shows an unnamed peninsula now known as Mud Island near the mouth of both the Wolf and Loosahatchie Rivers. Clearly with so many rivers coming together, Mud Island was just a muddy, mucky marsh.

Fast forward 30 years to 1914 and we find that the rivers in and around Mud Island hadn’t changed much: the Loosahatchie still met the Wolf just north of downtown. The southern point of the island was marked on the 1914 map (below) as nothing more than “accretion,” with “accretions subject to overflow” just to the north. Both areas are identified on the map as falling under the high water line of 1895.

Within this area of accretion are several city blocks bounded by Dock and Fulton Streets and Market and Poplar Avenues. Further to to the north, there is a Henning and Central Avenue, accessed from North Second Street (then called New Randolph Road, as it presumably could take a traveler all the way to the old river town that was once one of Memphis’ major economic competitors, Randolph, Tenn.). Henning Avenue had a railroad line within its rights-of-way, likely meaning it was very industrial in nature.

The top-right map in the collage below from (about) 1942 shows that Henning and Central have become Streets (east-west thoroughfares had been universalized as avenues and north-south thoroughfares as streets early in the 20th century, although Beale Street was allowed to remain an east-west street). Both are presumably accessible across a bridge on Hall Ave. Fulton Street runs right along the Wolf River, but Dock Street had presumably been inundated by the time this map was made. Note also this is the first time Mud Island is given a name: “City Island.”

By 1949, we have the Wolf River in roughly the position it is today and the Hall/Central/Henning streets on the island have been removed and Fulton Street to their south has been lost among railroad lines. Also nowhere to be seen: the Loosahatchie River, whose mouth was moved about 5 miles upriver from the southern tip of Mud Island, the result of significant channelization efforts by the Corps of Engineers resulting from the devastating 1927 Mississippi River floods. And look at the name of Mud Island: this is the first map that actually calls it “Mud Island!”

This 1958 map reflects that only the southern portion of Mud Island was Mud Island; its northern area was called Frames Island. The city limits criss-crossed the peninsula mid-way:

The map below from 1964 shows the new Wolf River Channel, which resulted in the Wolf River Harbor to the south of the channel since it was disconnected by the rest of the river by a land bridge:

The above aerial (left) from 1965 is the first to show the Memphis Downtown Airport, which opened in 1959 and would eventually serve up to 30 planes a day.

In the 1971 aerial (right), construction had begun on the Hernando de Soto Bridge and Interstate 40. The Memphis Downtown Airport was forced to close in 1970 due to the interstate’s construction. It was replaced by the General DeWitt Spain Airport, located about 3 miles up Second Street.

Finally, this 2013 aerial shows Mud Island as it is today, with the Mud Island River Park at the southern tip (below I-40) with housing development to the north. Mud Island Park opened to the public in 1982 with private development following shortly thereafter.

The next articles in the series will feature the various development proposals for the Mississippi River spit of land known as Mud Island.

Josh Whitehead, Planning Director of Memphis and Shelby County since 2010, administers the Office of Planning and Development and serves as the secretary to the Land Use Control Board, Board of Adjustment and Landmarks Commission.  A version of this article appears on Josh’s blog that features his take on Memphis’ design, history and architecture, Creme de Memph.

2 Replies to “Mud Island: A History Part I”