This is the first in a series, chronicling Memphian Aaron James’ journey in tracing his Memphis family roots.

The family I had spent the first half-century of my life disparaging turned out to have an infinitely richer and more fantastically non-mediocre history than I could have ever imagined. My father, who was the product of a tryst between two cousins, was descended from a protégé of William Penn, who helped found the state of Pennsylvania. My mother, an orphaned bastard child given away for free in the local paper, was descended from a Swiss Baron who founded the first permanent settlement in North Carolina.

Few people have the opportunity to trace their familial steps. We call it Genealogy. Merriam-Webster defines it as “the study and tracing of lines of descent or development.” But some individuals manage to take it to the level of art form. Memphian and longtime Cooper-Young resident Aaron James is one such individual.

I met Aaron in January of 2017, after a referral from a friend and an innocent “How can I submit to StoryBoard?” I was still building StoryBoard Memphis, I hadn’t begun marketing the budding magazine, and had yet to put together a process for submissions.

I quickly learned that Aaron’s journey along his family tree had traced the stories of distant family members through the original thirteen colonies, the Revolutionary War, slavery and the Civil War. It would lead to discoveries of some of the hidden histories of Tennessee and the Mid-South – histories rarely, if ever, told in your standard history books – and all the way back to 1827, just eight years into Memphis’ infancy.

It would also lead to the discovery of the infamous legacy of what became known as the Georgia Tann babies: infants born into compromising circumstances, kidnapped into adoption and sold illegally by the now-defunct Tennessee Children’s Home Society and at the hands of orphanage operator Georgia Tann. Aaron’s mother Gloria, he discovered, had been one such baby. 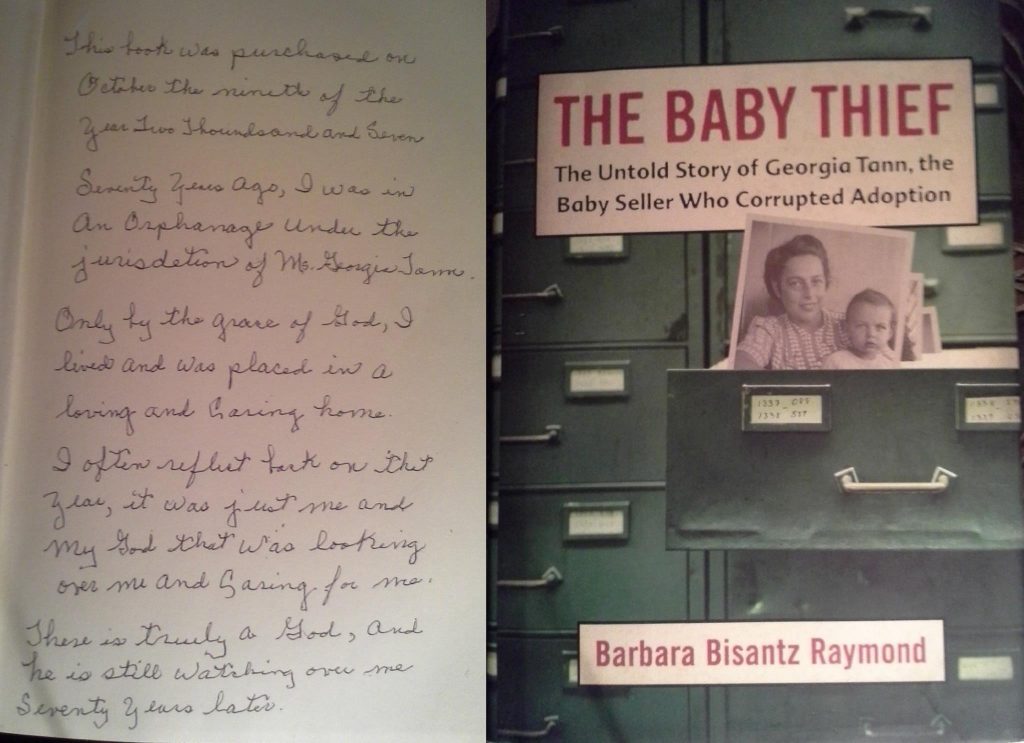 However, what would become a fulfilling and lifelong journey did not have the most promising of beginnings.

I was born into a family that reveled in mediocrity, bathed in it every Saturday night and ate it for Sunday dinner. Any efforts to glimpse beyond this constricted horizon were immediately squelched with the mantra, “You think your shit don’t stink.” It took the entirety of my twenties to drag myself from this quagmire, and a couple decades more of being on the outside looking in, to understand it.

One of the most famous lines from Steve Martin’s 1979 comedy classic The Jerk is, “I was born a poor Black child.” Contemporary political correctness aside, what the White character is trying to say is that he was born into vastly different circumstances than what his adult self might belie.  And in that sense, I can definitely relate.

With the reputation as a local activist, Aaron is most definitely a Memphis character. One of the many – myself included – who can be blindly maniacal in their obsession for Memphis and Memphis history, for getting Memphis history right, for sharing their enthusiasm for Memphis culture and history to whomever will listen, to setting Memphis records straight, in everything from neighborhoods and streets to buildings and businesses to restaurants and bars to music and bands to crime and poverty to oppression and racism to blight and renewal. 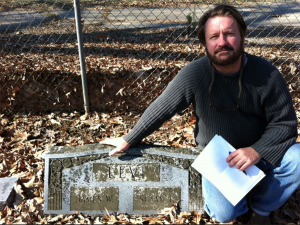 I first spoke to Aaron in an hour-long phone conversation, as he was driving somewhere into middle Tennessee to meet one more of his distant family members who were helping him add a few more pieces to his genealogical puzzle. We swapped opinions, broad strokes about everything Memphis from the Civil War to Civil Rights, efforts in preservation and how South Main was revived, and how so many of our residents are still marginalized and whose voices struggle to be heard.

My career can be summed up as, “25 years, 25 jobs, 25 addresses.” I quickly learned I had a penchant for developing napkin sketches into fully realized construction documents – a skill I wound up selling to firms all over the eastern half of the US on a contract basis. Lacking a professional degree, I eventually accrued enough work experience to sit for the ARE (the Architect Registration Examination). After my daughter graduated high school in 2003, I decided it was time to take the leap and open my own practice. When people asked why I chose to do this in Upstate New York – literally 15 miles south of the Canadian border – I would quip, “It was the farthest I could get away from Memphis and still be in America.”  Four years turned out to be enough time to prove to myself I could work under my own shingle, so I decided it was once again time for a change.

I learned that Aaron had fallen into his genealogical journey out of a few twists of fate, years after he had dismissed Tennessee and Memphis and, like many of us do, walked far and away from the pull of his roots. His return to Memphis was precipitous.

I was working at one of the most prestigious skyscraper firms in Manhattan and had just been assigned Lead on the second largest project in the firm (a 39-story residential tower overlooking the East River), when my sister called on Easter Sunday of ’08 to say our parents had been in a wreck. I literally packed up and came home overnight. Having already lost my two older brothers, I suddenly found myself ripped from my begrudgingly comfortable role of baby of the family and thrust into the even less appreciated role of de facto patriarch. My mother died three days after the wreck – it took my father two years to give up the fight.

In his return, Aaron found a much different Memphis than the one he had left years earlier.

While I was off chasing a white collar dream, the staunchly blue collar Cooper Young of my childhood had magically transformed into one of the top ten neighborhoods in the country.  Junk shops and parts stores had given way to world class restaurants and the baddest badass Deli on the planet: The Beauty Shop, where I had gotten my Donny Osmond fly-backs in 1976, was now the place to see and be seen (and that graciously fills my requests for Jack Daniels martinis – a little taste of home I invented while in NY).

Aaron’s simple question, “How can I submit to StoryBoard?”, has evolved into one of the most important parts of StoryBoard Memphis. One chief objective of the site is to provide artists from all walks of life a forum for telling their stories. So, when does an individual take genealogy to the level of an art form? In my estimation it’s when it becomes part of the individual’s expression. For it is one thing to simply trace your family history. It is another thing when such a search becomes part of your soul, a yearning that drives you to understand where you came from.

One night, as a means of researching the history of my girlfriend’s family farm in Arkansas, I signed up for a two week free trial on Ancestry.com. You know how some addicts say that the first hit of this or bump of that was all it took? That was me. I must have spent 200 hours on Ancestry those first two weeks. At the end of the trial period I already had the basic outline of the project that I knew would define the rest of my life.

Sitting at Midtown’s Otherlands Coffee one morning in January, my notes in hand, I asked one final question of Aaron. The question that many artists struggle to answer. “What would you say is your source of passion for this? What continues to drive you?”

Sitting across the table, he paused and looked inward. His eyes closing and his jaw tightening as if reading an ancient scroll that only he could see, “Well, how can I not now?” he started. “It’s as if all of my ancestors are sitting up on a shelf, looking down on me and telling me ‘Look, we lived it! You’re the one who’s gotta write it!’”

Aaron intends to turn his research into a book. “America: A Family Perspective, if and when it’s ever finished (research being so much more compelling than actual compilation), will be the telling of 334 years (1619 – 1953) of the advancement of Western Civilization, as experienced by 250 some-odd souls who would eventually boil down to the two people who created me.”

StoryBoard Memphis will be a part of Aaron’s adventure, tracing his journey under the title “Aaron James’ Memphis: A Family Perspective,” from its grand beginnings in 2012 and following his exciting and sometimes arduous progress moving forward. It will be a chronicle of one man’s enviable obsession, and an unearthing of Mid-South histories never before told.

Although none of their names can be found in your average high school history book, (my ancestry) knew their share of those people (whose lives intertwine with Tennessee history). Even the sainted couple who pulled my mother from obscurity bring their own families’ histories to the tale. In fact, it was the 3rd great grandfather of my mother’s adoptive mother (the woman I knew as my maternal grandmother, and one of the few truly positive influences in my life), who used his father’s Revolutionary War land grant to first come to the Shelby County area in 1827.

Shelby County. 1827. Sounds to me like a good place and time to start.

Aaron James is a native Memphian and resident of Memphis’ Cooper-Young neighborhood. He is known locally for his activism, advocating for the progress and safety of his CY neighborhood.  He is chronicling his journey in his FaceBook page America: A Family Perspective by Aaron James.