Deciduous Distancing need not apply as the weather warms up

This spring, we are all hopefully doing our best to practice Safer at Home and Shelter in Place guidelines. But we will still need a good walk every now and then, for sanity, exercise, a little peace and vitamin D. And as the weather warms up and dozens of shades of green return to the trees, walk any street in Central Gardens or Cooper-Young, or along the V&E Greenline, and look up.

In Central Gardens, fifty to a hundred feet above you’ll see a canopy of green – the leaves of the various oak, maple, dogwood, magnolia, spruce, cherry and elm trees – towering over you like the ceiling of a chapel. Along Carr Ave, or Harbert, Willett, or Belvedere Blvd, they provide shade from the hot sun, and inspiration in their age and majesty.

Together, the roughly 100+ species of trees within the 511 acres of Central Gardens’ boundaries make the neighborhood a certified Level 3 Arboretum. 2018 marks the neighborhood’s tenth anniversary of this distinguished status. Central Gardens was designated a Level III Accredited Arboretum by the State of Tennessee on May 31, 2008.

Defined as a specialized type of botanical garden that focuses on trees and other woody plants, “arboreta” (plural use of arboretum) collect, grow, and display trees, shrubs and other plants for people to study and enjoy. Ideally they are open to the public for education and inspiration, which is certainly the case for the neighborhood today.

In late summer of 2008, a few months after Central Gardens achieved this status, The Commercial Appeal featured a story by journalist Christine Arpe Gang. 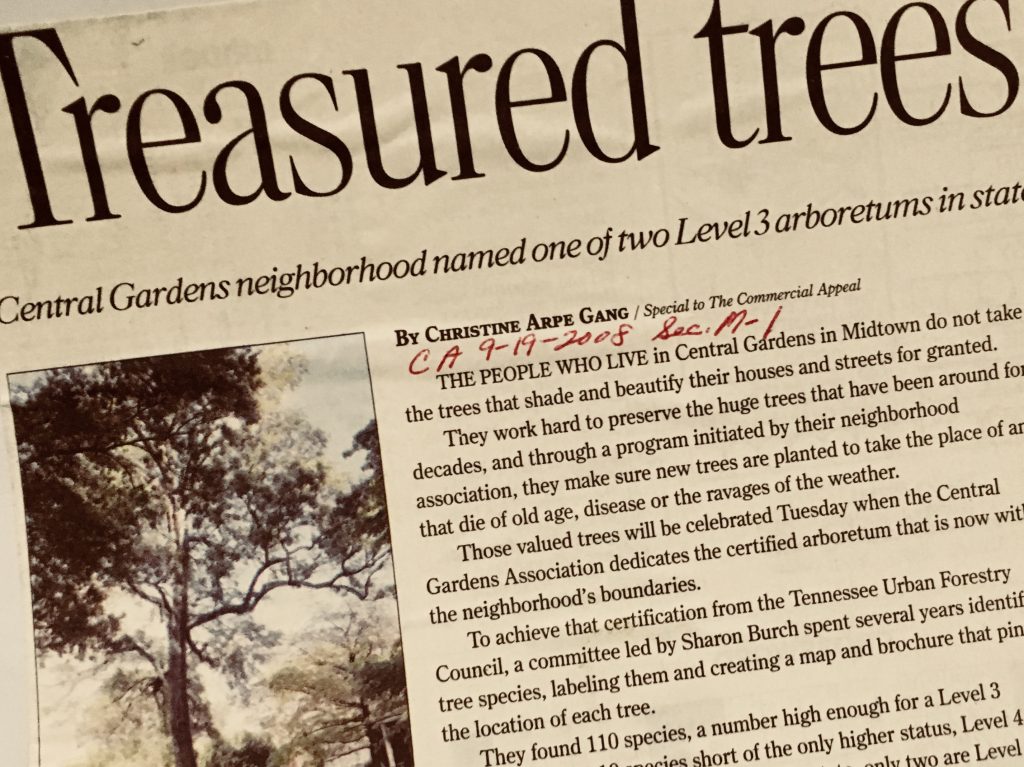 “The people who live in Central Gardens in Midtown,” the article read, “do not take the trees that shade and beautify their houses and streets for granted. They work hard to preserve the huge trees that have been around for decades, and through a program initiated by their neighborhood association, they make sure new trees are planted to take the place of any that die of old age, diseases or the ravages of the weather.”

Mid-South weather has indeed been ravaging force a few times over the years. Three years ago this Memorial Day weekend, chronicled here, a “straight-line” wind and thunderstorm gained momentum moving south down the Mississippi River and hit Memphis with a fury matched only by the legendary Hurricane Elvis of 2003. 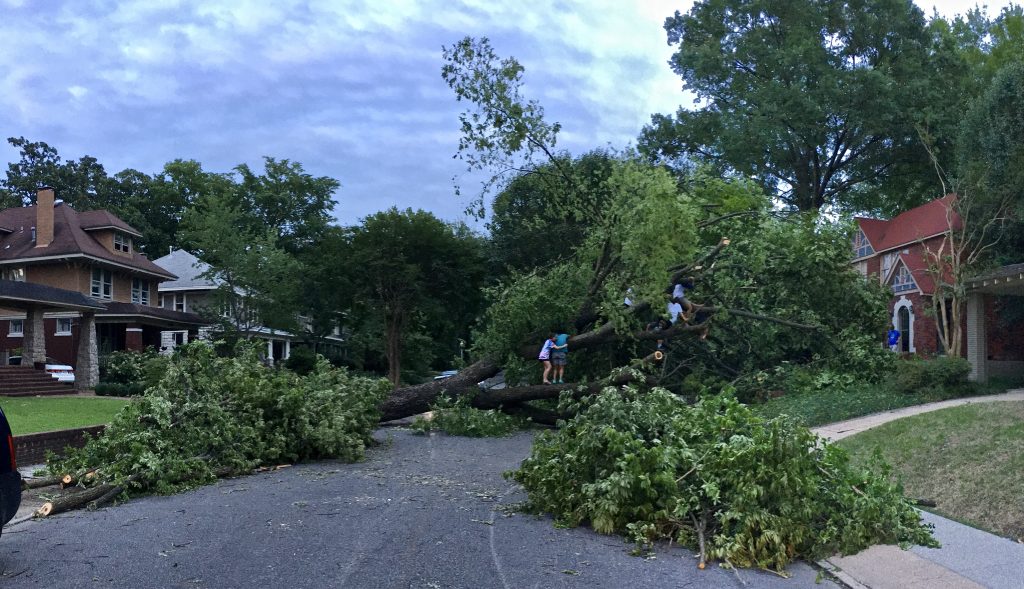 It was estimated that Central Gardens lost more than a dozen mature trees, many of them around a hundred years old and over four stories high. Though the losses were heartbreaking – many families grew up with the elms and oaks that watched over their homes – the casualties hardly made a dent in the roughly 2000 trees of the arboretum as certified and celebrated in 2008.

“To achieve that certification from the Tennessee Urban Forestry Council, a committee led by Sharon Burch spent several years identifying tree species, labeling them and creating a map and brochure that pinpoints the location of each tree. They found 110 species, a number high enough for a Level 3 designation, just 10 species short of the only higher status, Level 4.” (Christine Arpe Gang, for the CA)

It gave Central Gardens one of only two Level 3 designations out of 55 certified arboretums – pardon me, arboreta – in all of Tennessee. (In 2017, Midtown’s Cooper-Young neighborhood became the second Memphis neighborhood to achieve Level 3 designation after a multi-year effort led by CY resident and community leader Judi Shellabarger.)

However, that prestigious third level of designation was not within the original conceptions of the project. “The idea for the arboretum had been brewing in my mind for a while,” said Sharon Burch at the time. When she started the project, she assumed she could identify about 30 species of trees, which would have qualified the neighborhood as a Level 1 arboretum.

But when a fellow named Plato Touliatos joined the effort, a much higher designation of a level 2 or 3 became the goal. “When Plato Touliatos moved into our neighborhood,” Sharon said, “I knew we could do it.”

The late Plato Touliatos, who passed away in November of 2011, was one of the top plantsman in the Memphis region, a businessman and philosopher who spent his life teaching people about the natural world. He and his wife Sarah were inducted into the Tennessee Nursery and Landscape Hall of Fame in 2009. It was said that Mr. Touliatos was a teacher to the entire region, who seemed to know more about forestry than anyone else.

When Touliatos joined the neighborhood effort with Ms. Burch, he said “there is so much diversity of trees in Central Gardens, I couldn’t see us stopping with just 30.”

Over the period of several years, ten or more arboretum committee members paired up with Burch and Touliatos and walked the streets of the neighborhood, surveying and identifying the trees. Former Central Gardens board presidents Libby Pritchard and Lila Beth Burke joined the walks as well, carrying several reference books and a clipboard as they walked, looked up, and took note of tree after tree.

Burch said at the time that she took on the role as primary “notebook keeper,” keeping track of all the research and asking homeowners’ permission in having their trees labeled and included in the survey.

But according to many interviewed for the 2008 CA story, Sharon Burch was more than just the keeper of the notebooks.

Patrick Haller, the 2007 president of the Tennessee Urban Forestry Council, said that “Sharon united her Central Gardens neighbors to create a Level 3 arboretum. She did such a good job, we recently bestowed the Citizen Activist of the Year award for 2008 to her.”

Lila Beth Burke, CGA president in 2007, added that she doubted the three-year project would have been completed without Burch’s leadership. “She kept all the information we collected organized by developing spreadsheets that we could all understand. And she worked hard to keep us all in the loop, without holding a lot of meetings.”

As part of the designation, the committee recorded virtually every tree. They pinpointed the trees’ locations by street, developed suggested walking routes, mapped the locations and made the information available on the neighborhood website, centralgardens.org, where the information lives to this day.

The neighborhood is filled with deciduous trees (say it with us, dee-sid-u-us) – those that lose their leaves in the fall – as well as the ever-faithful evergreen trees, whose foliage remains green throughout the year. By shear numbers alone, the tree counts, listings and cataloging of rarer varietals are quite impressive.

After Hurricane Elvis in 2003, the neighborhood had grown concerned that many streets were in danger of losing that tree canopy, and spent more than $50,000 to buy and plant more than 300 front-yard trees throughout the neighborhood, free for homeowners who requested them.

After last year’s Memorial Day storm, similar concerns were expressed as those dozen or more mature trees were blown down, strewn across yards and streets. And this year, the neighborhood embarked on an effort to replace diseased trees along Belvedere Blvd, Cleveland Street and York Avenue.

Finally, in 2015 the neighborhood created a mobile App that included a catalogue for each tree, a description and a GPS location for all of them. The App can be downloaded at this Central Gardens link.

These are all efforts to uphold the neighborhood’s status as a Level 3 Arboretum, a status that continues a principle goal of any arboreta, which is to “encourage and support the planting and conservation of trees for environmental improvement and enhanced quality of life.”

Cooper-Young’s 2017 designation carried with it the same hopes and aspirations. Writing for the Cooper Young Community Association, Judi Shellabarger said “Our plan was to bring this arboretum to our neighborhood streets where residents and visitors walk, exercise, shop, dine, and socialize. Our desire is to add to our already beautiful canopy of trees, beautify our neighborhood, improve our air quality, and teach our children to love the beauty of nature.”

In Vollintine-Evegreen, a V&E Greenline committee has been over the last couple of years working toward completing the necessary requirements to establish a Level 1 Arboretum as a part of the V&E Greenline. (More information on the arboretum can be found at the vegreenline.org website here.)

Trees add a distinguishable value to the neighborhood, the homes within it and the yards that line it. Ask any jogger or walker, or any kid on a tree swing, how they feel about the cool that comes from the shade of our trees, and they will agree with the sentiments of the late Plato Touliatos.

“When you go through a well-treed neighborhood,” he said, “you feel like everything is right with the world.”

While not much feels right this spring, it is comforting to know that as we’re practicing social distancing, deciduous distancing need not apply.

Thanks to Christine Arpe Gang and her September 2008 reporting for The Commercial Appeal.

Read about the Cooper-Young Arboretum project on the Cooper Young Community Association page.

A version of this story appears in the Central Gardens Newsletter.