The Commercial Appeal reporter Joseph Thompson’s stark headline made the front page that Friday morning, detailing the tragic deaths of two sanitation workers – Echol Cole, 36, and Robert Walker, 30 – who were crushed by the packing unit of their garbage truck on a rainy Thursday afternoon, around 4:30 p.m. on Colonial Road, just north of Quince in East Memphis.

No one could know, on that cold February morning in 1968, reading the accounts in the day’s newspapers, that they were witnesses to history, the first in a chain of events that would take Dr. Martin Luther King, Jr. to the balcony of the Lorraine Motel two months later.

The story of the men’s deaths shocked most of Memphis. But to many of the men who worked around these trucks each day, the event seemed almost inevitable.

The Friday afternoon Memphis Press-Scitimar reported an account by a Colonial Acres resident, who from her kitchen window had witnessed the incident as it happened across the street. “It was horrible,” she said.

The CA reported that the crew chief, Willie Crain, heard the unit begin to operate as he was driving the loaded truck south along Colonial, headed for the Shelby Drive dump. Another crew member said, “I didn’t know what was happening.”

The morning news that first day of February had included forecasts for heavy rain and thunderstorms for the Mid-South, and had issued tornado watches for the afternoon hours in and around Memphis and Shelby County.

No tornadoes would touch down. But wind gusts later in the day whipped through the area and brought isolated heavy rains and hail that caused minor damage and sent people fleeing for momentary shelter under awnings or in store fronts, and sanitation workers scrambling for cover in between stops.

It was a common practice for these workers – they were called “garbage packers” – seeking refuge in the rear compactor of garbage trucks, riding with the filth in the compactor area in bad weather from stop to stop. And without adequate union support and heavy biases favoring white workers, these men did everything possible to work in any kinds of weather: shine, rain, sleet or snow.

Driver Willie Crain, talking to the Press-Scitimar, said because of the heavy rain the two men got in the back next to the compressor. The truck was full of trash, he said, and did not leave much space for them to stand without pushing against the compression unit. 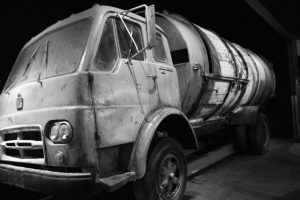 At The River I Stand – Joan Turner Beifuss’ sweeping 1985 account of Dr. King’s fatal trip to Memphis – described it this way:

The truck, a barrel-type unit called wiener-barrel by the men, in which garbage thrown in the sides was mashed toward the back by a hydraulic ram, had completed the day’s route and was heading toward the dump. The rain had been heavy. Cole and Walker had not worked as garbagemen for very long. Instead of using the steps and handholds on the outside of the truck, they were standing inside next to the ram. Somehow the electrical apparatus on the compressor shorted out, perhaps by a shovel shaking loose and falling across the wires. The mashing mechanism began to work. Neither man could stop it. The stop button was on the outside. 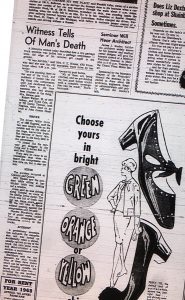 Verne Road resident Mrs. C. E. Hinson, who witnessed the accident from her kitchen window across Colonial Road, described to the Press-Scitimar what she saw. “It was horrible. He was standing there on the end of the truck, and suddenly it looked like the big thing (the compression unit) just swallowed him. He was standing on the side and the machine was moving. His body went first and his legs were hanging out. I didn’t know at the time someone else had already been crushed in the thing.”

“It looked like his raincoat got snagged in the thing and it pulled him in,” said Mrs. Hinson.

“The motor started racing and the driver stopped and ran around and mashed that button to stop that thing,” said one of the crew riding in the cab of the truck. “I didn’t know what was happening. It looked to me like one of them almost got out, but he got caught and just fell back in there.” (At The River I Stand)

The Press-Scitimar in their reporting said that a preliminary investigation indicated that the compression unit was turned on accidentally when a shovel, usually carried on top of the truck, fell onto some wires and short-circuited a connection. The director of public works, Charles Blackburn, said that the city operated two trucks of the kind in the accident that had levers that could be operated by push button. These two trucks, he said, were being held until a complete investigation could be made. 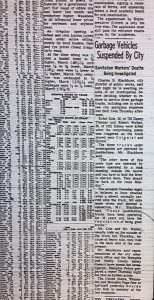 The following day, The Commercial Appeal reported that public works director Blackburn said that he was “awaiting results of an investigation before deciding whether to restore to service three garbage trucks, including the one in which two city sanitation employees lost their lives Thursday afternoon.”

As stunned as Memphis was in the workers’ gruesome deaths, a week after the story ran little was communicated by the local media. The two daily Memphis papers were already on to other news stories – unsafe bridges around rural Shelby County; Nixon officially and again entering the campaign for the presidency; the arrival of Elvis’ first child, Lisa Marie, at Baptist Hospital.

“We had to keep on working”

However within city circles and especially in Sanitation, years of frustrations had quickly surfaced, exposing the unsafe equipment and unfair treatment and working conditions, especially for black workers. As At The River I Stand told it, “There was no (worker’s) compensation. Neither man had life insurance. The city paid the families back pay, an additional month’s salary and five hundred dollars toward burial expenses.”

In addition to the unfair working conditions, the harsh realities of workers’ pay would also be exposed. At the time of the fatal accident, sanitation workers’ wages were so low that many were on welfare. Some relied on food stamps. Overtime was not paid to men forced to work late night shifts.

Columnist Otis Sanford, in his vivid book From Boss Crump to King Willie, said “This was a group with arguably the most menial jobs in town, lugging tubs full of filthy garbage and trash from the back yards of Memphis residences to a waiting truck… Most of the sanitation work force had come to Memphis from plantations… They were considered the lowest of the low among municipal employees and were taken for granted by both black and white Memphians.”

Fifty years later, these painful truths can still be felt. Speaking to a congregation at Church of the Holy Communion in East Memphis in late January, a 1968 sanitation worker on the job that day, the Reverend Cleo Smith, said that “the day we got the news that those two men had gotten crushed, in the back of a truck, we had to keep on working. We couldn’t stop.”

For over fifty years, Rev. Smith had given the incident much thought as it related to the civil rights movement, the events that would follow, and the historic sanitation strike. “It was almost like two dogs, walking down the street,” he said. “One of them gets hit by a car, and the other one’s just standing there looking. So that’s the way I feel about that thing, that we were just treated like dogs.”

With the tragic accident and the workers’ unfair treatment exposed, former sanitation worker Thomas “T. O.” Jones now had a cause to rally around. A couple of years earlier he had failed in gathering enough support to his union for his workers to strike against unfair pay and conditions. But after a tragedy like this he now had plenty of support and unity, and he would go on in the coming days to organize a strike. In the words of Otis Sanford, Memphis garbage men now had a cause for equality under the blanket of the civil rights movement. They “may have spent their work days in filth, but they were sick and tired of being treated like dirt.” Or, like dogs.

Witness to History. This article is the first in a series revisiting Memphis’ reactions and media coverage of the events that brought Dr. Martin Luther King, Jr. to Memphis in 1968.