April 1968 was the most important month of the 20th Century for the city of Memphis. The Sanitation Strike and the assassination of Dr. Martin Luther King, Jr. changed the direction of Memphis history just as a sandbar diverts the course of a river.

The six week-old work stoppage of Memphis’s sanitation workers experienced a serious blow on March 28th when a protest demonstration led by famed civil rights leader Dr. Martin Luther King, Jr. was violently disrupted by unruly marchers who broke windows and looted stores. Property owners suffered thousands of dollars’ worth of property damage due to the chaos that also saw the death of teenager Larry Payne, who was shot and killed by police.

A strict curfew was imposed and the Tennessee Army National Guard was activated – within a few hours soldiers in armored personnel carriers and trucks were patrolling the streets of Memphis. The events of that horrible day profoundly influenced the tragic occurrences that took place in Memphis during the month of April 1968.

Many Memphians no doubt watched the protest unfold on the local and national news programs broadcast over television that evening and the following day. When not keeping up with the coverage of the sanitation strike, many turned to the primetime offerings on ABC, CBS and NBC. At 7:30 on the evening of March 29th for example, Memphians had the choice of watching Gomer Pyle, USMC on Channel 3, Channel 13’s Operation: Entertainment and a new episode of Star Trek on Channel 5.

For those who turned their dials to Channel 5 and Star Trek, they saw an eerie prophecy of what was about to happen in Memphis.

In the episode entitled “Assignment: Earth” the crew of the U.S.S. Enterprise traveled back in time to conduct “historical research.” Captain James T. Kirk explained in his audio log: “We are monitoring Earth communications to find out how our planet survived desperate problems in the year 1968.” Early in the episode Kirk asks his First Officer Mr. Spock for a report. Spock replies: “Current Earth crises would fill a tape bank, Captain. There will be an important assassination today….”

An uneasy calm settled over Memphis as the month of April began. The curfew was lifted and the National Guard was sent home as Memphians tried to resume their normal activities. On April 2nd Larry Payne’s funeral was held at Clayborn Temple – 700 people attended the services without incident. While Payne’s family and friends mourned their loss, Dr. King’s lieutenants were organizing a second march while city officials worked to block the demonstration from taking place.

On April 3rd, the same day Dr. King arrived back in Memphis, City Attorney Frank Gianotti secured an injunction from Judge Bailey Brown blocking any march led by non-Memphians. Despite the injunction they were determined to lead another demonstration. “Either the movement lives or dies in Memphis,” Dr. King emphatically declared. Deeply depressed and fighting a cold, he and his aides made their way to the Lorraine Motel to plan their next moves.

In his final speech given that evening at Mason Temple the famed civil rights leader explained why the strike, and the broader poor people’s movement, had to continue in the Bluff City. “It’s all right to talk about streets flowing with milk and honey, but God has commanded us to be concerned about the slums down here and His children who can’t eat three square meals a day.” Dr. King spent the following day, April 4th, resting at the Lorraine and waiting to hear the outcome of their legal challenge to the anti-demonstration injunction. The dark mood that enveloped Dr. King the day before seemed to lift as he stood on the second floor balcony waiting to go to dinner. A few minutes later he was dead by the hand of “a sick white brother.” 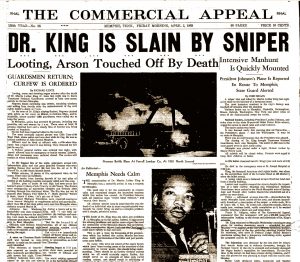 Only once before had Memphis experienced an event that changed the course of local history. The first was the 1878 Yellow Fever epidemic where 5,000 people died and thousands more fled the city. Dr. King’s murder was the second. As one historian wrote, “a new city began to emerge. Angrier and more racially polarized….”

Dr. King’s death did not immediately end the strike – it would not be until after 19,000 people joined Dr. King’s widow Coretta Scott King in a memorial march through downtown Memphis that the city finally agreed to the union’s demands of recognition, a payroll deduction for union dues and a wage increase of 15 cents an hour. 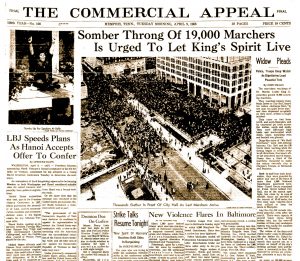 On April 29th 150 leaders of the Poor People’s Campaign, including King’s successor Ralph Abernathy, arrived in the nation’s capital. In a series of meetings with federal officials they demanded jobs for unemployed workers, food for hungry citizens, equal protection under the law and a guaranteed income. As the month of April ended it was far from certain that Dr. King’s vision of economic justice for all Americans would survive his death in Memphis.

Memphis author and historian Wayne Dowdy is the Manager of the Main Library’s Memphis and Shelby County Room. He also writes for the local monthly publication Best Times and is the author of several books on Memphis history, including A Brief History Of Memphis, Hidden History Of Memphis, and Mayor Crump Don’t Like It. This is Mr. Dowdy’s first column for StoryBoard Memphis.