Your correspondent explains the significant events of this month in Memphis history, including the story of a railroad worker’s Memphis moment, a very brief-ing on professional soccer in Memphis, a dinner theatre’s anniversary, and a disaster at a local chemical plant.

Tragedy dominated the news of this month in Memphis history when a chemical plant exploded in southwest Memphis. At 9:25 am on July 5th an 8,000 gallon tank filled with the insecticide parathion caught fire and exploded at the Drexel Chemical Company located at 2487 Pennsylvania.

“I heard one hell of an explosion and ran like hell,” explained maintenance mechanic David Trunble who was working a mere 15 feet from the explosion.

In a nearby warehouse stood Robert Belden, who “heard an explosion. It was like a dull boom and I saw the doors of the warehouse coming off. Then it knocked me down, and the flash burned my hands in a couple of places and I went outside.”

Water used by firefighters to extinguish the insecticide spread the blaze through a cache of methyl parathion which they poured into the Mississippi River because the fire could not be contained. Sulphuric acid was also dumped into the river as a toxic cloud spread beyond the plant, endangering the lives of area residents.

Three police helicopters and several squad cars equipped with loudspeakers ordered residents to evacuate the area. 3,000 Memphians fled the scene including 400 who were evacuated by MATA buses to a Red Cross center hastily opened at Whitehaven High School. As refugees poured out of Southwest Memphis, truck driver Arthur Stokes motored into the area to make a delivery. “It looks like a bomb hit this area,” he said.

231 people visited nearby hospitals complaining of bleary eyes, headaches and vomiting but their treatment was hampered by the lack of medical personnel trained in chemical emergencies. Over the next few years Drexel paid out $30,000 in settlements with employees and residents who were injured in the explosion. 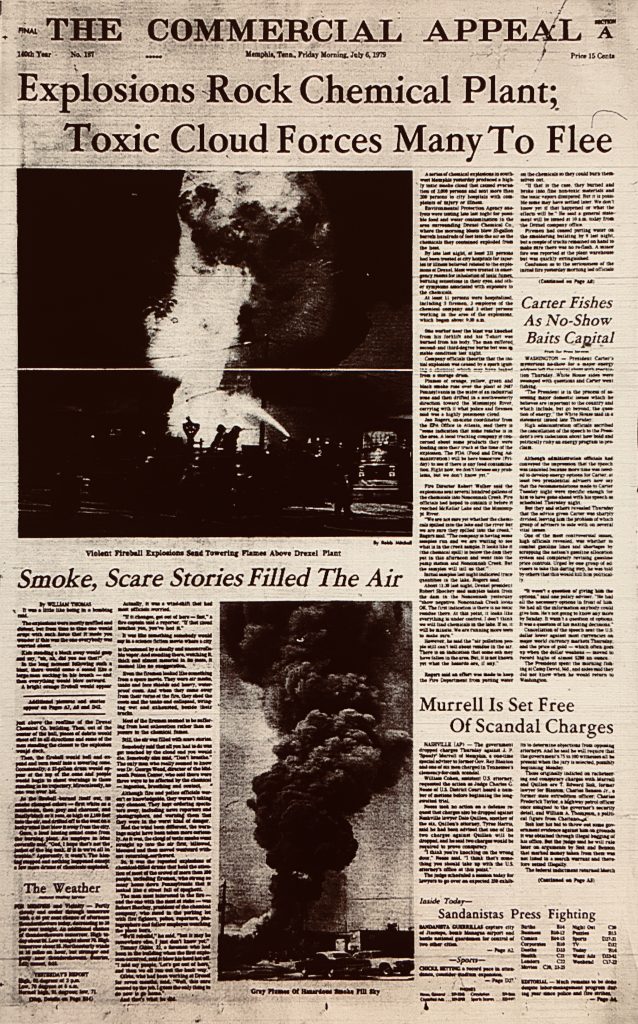 In other news the Gaslight Dinner Theatre celebrated its ninth anniversary of providing Memphians with a unique theatrical experience.

Located at 1110 E. Brooks Road, Gaslight opened in 1970 as a combination restaurant and live theater. Young actors from New York and Los Angeles performed in such productions as Fiddler on the Roof, Teahouse of the August Moon, and How to Succeed in Business without Really Trying. According to manager Nanci Hipsher the theater had “a good family atmosphere that appeals to both the young people and the older, more conservative people.”

Although a popular entertainment venue – the 300-seat theater was often sold out – Gaslight filed for bankruptcy in 1983. It remained opened until September of 1988 when operator Howard Cobbs was forced to close the Gaslight Dinner Theatre when he could no longer pay its $200,000 debt to the State of Tennessee.

In sports the Memphis Rogues professional soccer team remained at last place in the North American Soccer League’s central division. The team began the month basking in their 2-1 victory over the Dallas Tornado but a string of losses kept them in the cellar for the rest of July, including a 6-0 loss to the Atlanta Chiefs. The Rogues became a Memphis team in October of 1977 and remained until September 1980 when the team was sold to a Canadian businessman who relocated the team to Calgary. Despite its short time in the Bluff City, thousands of Memphians embraced the team and is still fondly remembered today.

“City Slicker” has his moment

Finally, your correspondent takes you to the home of J. Robert Holderbaugh, a partially paralyzed retired railroad worker.

Bed-ridden since 1972, Holderbaugh found solace communicating with friends using a citizens band receiver. “I got a CB radio last November, and it opened up a new world for me,” Holderbaugh explained. After trying out several different channels, the former railroad man settled on channel 17.

The folks on channel 17 felt the same way about Holderbaugh. On July 6th they hired an ambulance to bring him to Woody’s Restaurant on Summer Avenue so they could meet their friend in person.

Memphis author and historian Wayne Dowdy is the Manager of the Main Library’s Memphis and Shelby County Room. He also writes for the local monthly publication Best Times and is the author of several books on Memphis history, including A Brief History Of Memphis, Hidden History Of Memphis, and Mayor Crump Don’t Like It.