Skip to content
“Madison is one of the last, walkable streets of its kind that we have left.”
That’s what June West of Memphis Heritage told me when I started this endeavor to document Madison’s history.
Iconic Memphis author and filmmaker Willy Bearden said, “Madison really is old Memphis, and what Memphis was.” 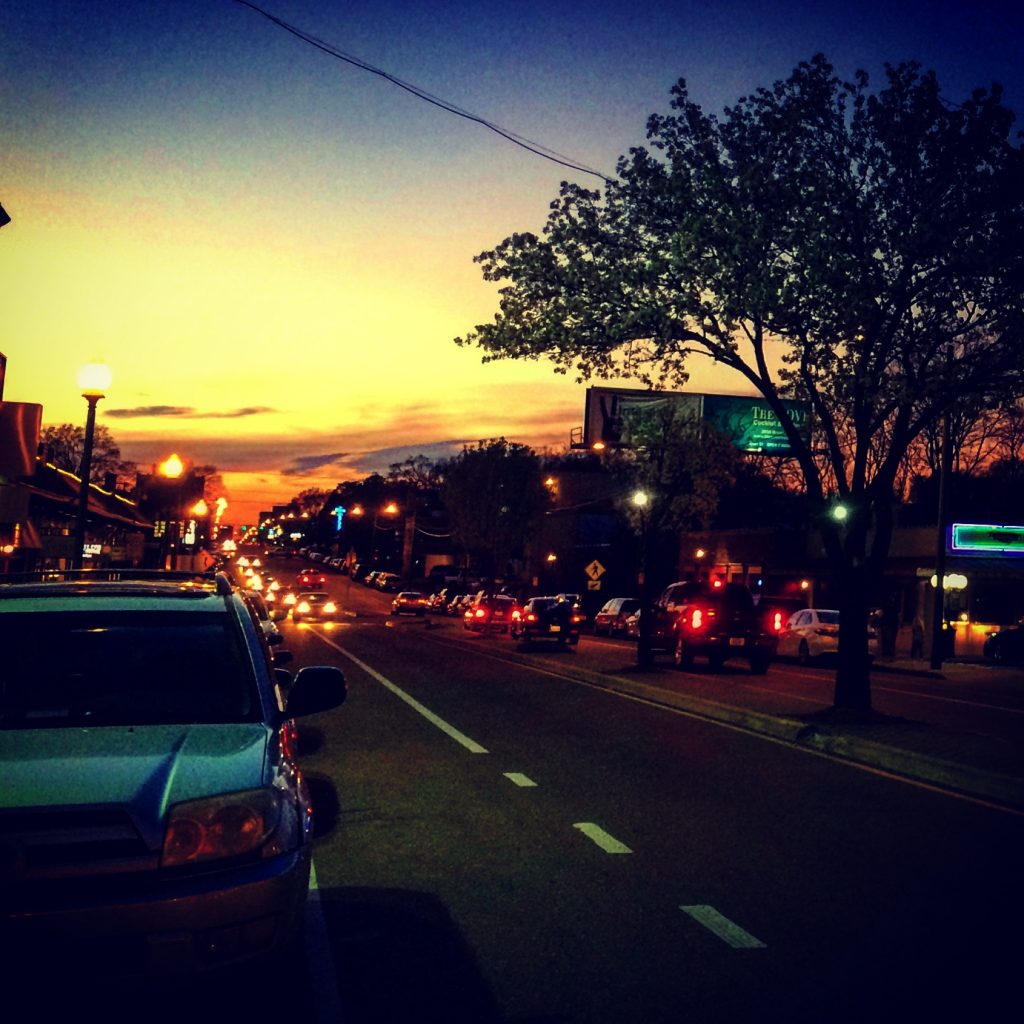 This Madison project began as more of a hobby. But the more I’ve worked on it, the more interviews I’ve done, the more the project has taken on a life of its own.

Without further adieu, I’m going to introduce ya’ll to something called New Urbanism (some of you of this know already). Only a few decades old in its theory, New Urbanism is really quite old in terms of actual practice. I think it can be summed up in this wonderful, memorable passage from the late great Jane Jacobs, the urban activist who in the 1960’s helped save New York’s SoHo and Greenwich Village from being leveled for an expressway:

“Under the seeming disorder of the old city, wherever the old city is working successfully, is a marvelous order for maintaining the safety of the streets and the freedom of the city. It is a complex order. Its essence is intricacy of sidewalk use, bringing with it a constant succession of eyes. This order is all composed of movement and change, and although it is life, not art, we may fancifully call it the art form of the city and liken it to the dance … an intricate ballet in which the individual dancers and ensembles all have distinctive parts which miraculously reinforce each other and compose an orderly whole. The ballet of the good city sidewalk never repeats itself from place to place, and in any once place is always replete with new improvisations.”

Thriving cities and towns are walkable – think of traditional downtowns and town squares. Brings to mind easy weekend afternoons, small shops, the old soda fountain. Memphis on the other hand has often been cited as one of the least walkable cities in the U.S. There are a few wonderful exceptions – South Main, Cooper Street from Young to Union, Broad Avenue. And of course Madison.

What makes Madison so unique? What sums it up nicely is what Mr. Bearden and Ms. West said, that Madison is old Memphis, and that Madison is one of our last walkable streets.
And if you have a few 10 or 20 minutes, whether you’re new to Memphis or have lived here all your life, take this little driving tour through Midtown the next time you’re out on a random weekday or Saturday afternoon, and pay close attention to your surroundings:
Start at Cooper-Young. Drive north on Cooper Street toward Central Avenue – casually, don’t mind that person behind you who seems annoyed – and look around. Look at the height and human scale of the buildings. They are inviting.

Before the second railroad trestle, turn left on Central Avenue. The approach to Central Gardens is lined with old oaks trees and hundred-year-old houses atop lawned bluffs. 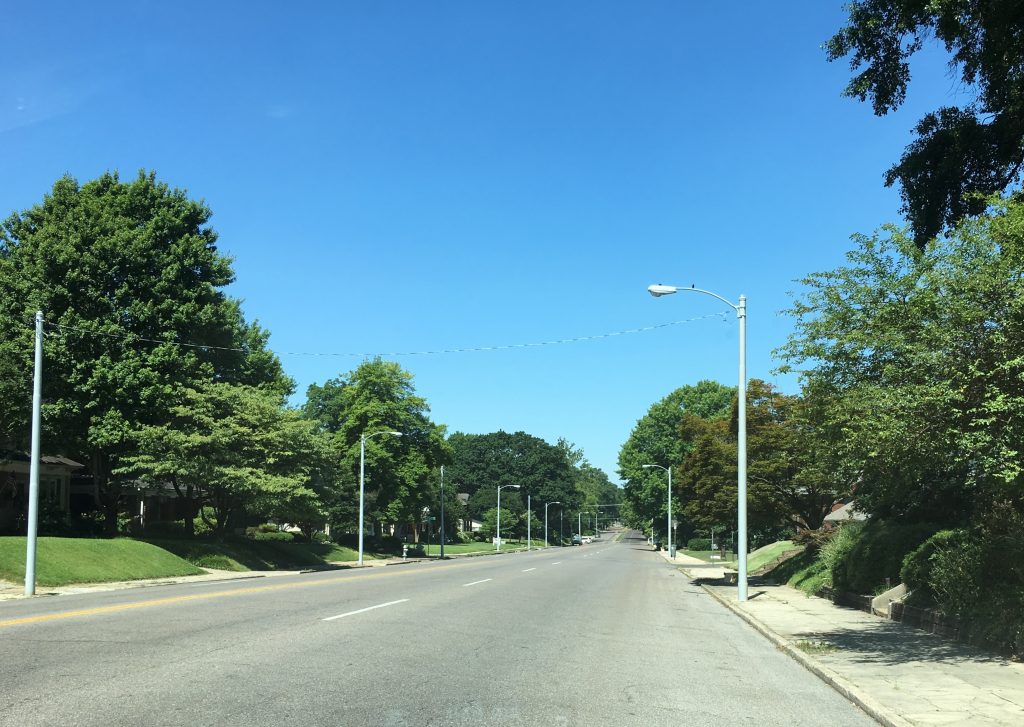 Now turn right onto Belvedere Boulevard. Belvedere has an interesting history on its own. But notice the landscaped median down the street. A true boulevard if there ever was one. 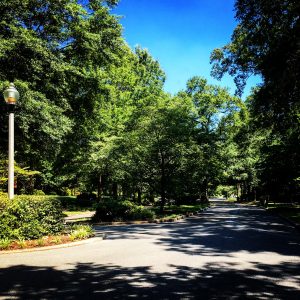 When you reach Peabody Avenue, turn left. More green bluffs, more trees over the street. Don’t drive too fast, this here’s a residential neighborhood. Depending on the time of day, there may be a few joggers, bicycles, baby strollers.

Go all the way to Cleveland Street and turn right. When you get to the light at Union – you’re going to go straight, no turning yet, and you’ll inevitably have to wait at the red light – think about the little pleasant drive you just had and take a look at your surroundings. There’s a gas station to your right, and a big block of concrete and steel called Union Centre to your left, with a big LED screen flashing advertisements to distract you while you wait. 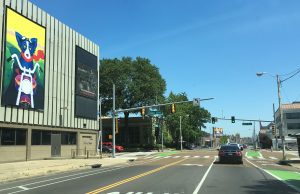 Take Cleveland all the way to Madison Avenue, and get in the right-hand turn lane. 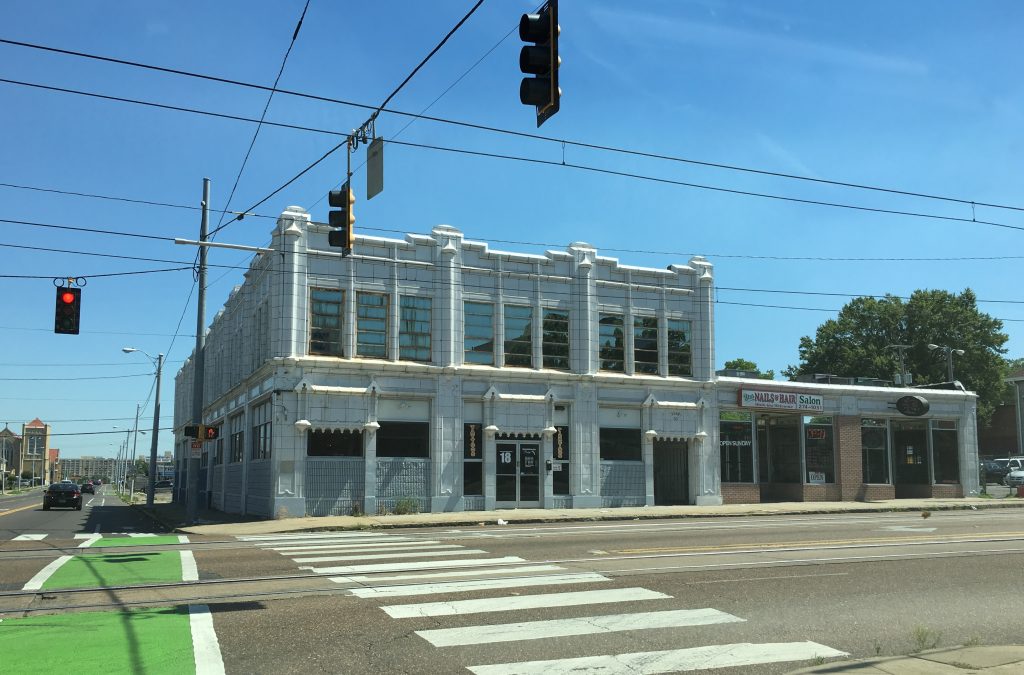 Take a look at that white-tiled building on south-east corner. 1348-54 Madison Ave., a beautiful example of a classic early-century storefront. Once housing a drug store, a hat shop and a market among other things, today it’s home to a tattoo parlor and a nail salon. Store fronts a hundred years old are one of the primary attractions of Madison.
As are the remnants of Madison’s old “dummy” trolley line – notice the rails embedded in the street before you turn right to head east.
Note the trolley cables above you, and drive along the few hundred feet of rails, for fun. As you drive along, take note of the old store fronts you’ll see along the way. And you’ll pass big brown Minglewood Hall on the right. But as you approach Avalon Street take a look at that giant parking lot on your left. Somewhere past all that asphalt and vehicular sprawl is a Cash Saver. Keep driving.
This is more like it: 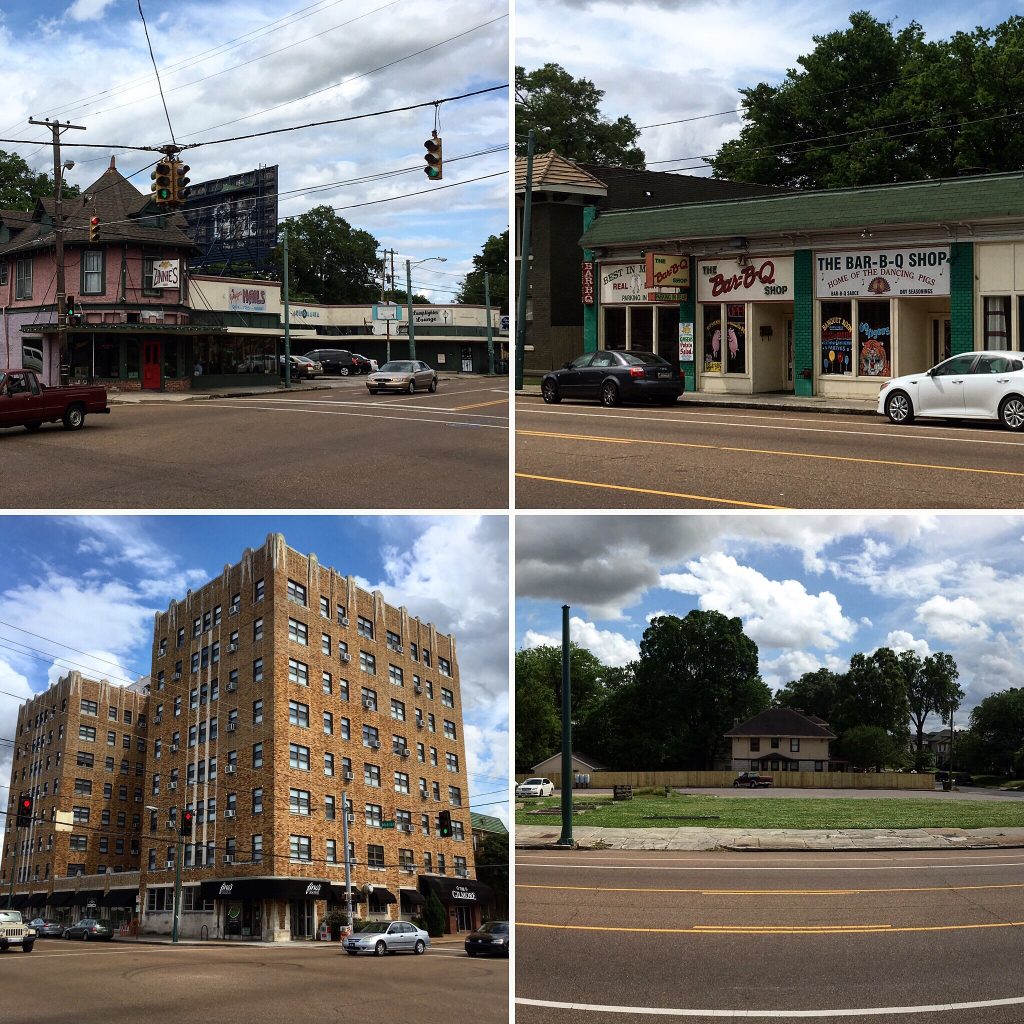 At Belvedere, (clockwise from the top-left) you’ll see Zinnie’s bar and the mini-mall that’s home to Audiomania Records and the Lamplighter Lounge. Then you’ll pass Memphis’ own Bar-B-Q Shop and the Blue Nile restaurants. At McLean you can’t miss the historic Gilmore Building and Fino’s Italian Deli down in the corner. And before you reach Huey’s diner, you may notice a wide patch of green and a Huey’s-sponsored community garden. This was the location of the old Anderton’s restaurant, a local favorite for generations of Memphians.
After passing Huey’s, slow yourself down a bit and you’ll be arriving into the heart and entertainment hub of Midtown and Overton Square.

Rounding the corner at Cooper is Lafayette’s Music Room, and that Spanish-style blue building with the yellow-orange awning that houses the burger and taco restaurant Babalu was once home to the first TGIFridays outside of New York, and the anchor of Overton Square for years.
But only four to five years ago this stretch of the square was desolate. And before Bob Loeb and associates stepped in, purchasing the property and beginning an historic restoration, was threatened with partial demolition at the hands of a major grocery chain.
Keep heading east, and through Cooper. To your left is the new construction of Ballet Memphis.

Hard to believe today, but this corner has been home to a service station, a restaurant, a nightclub, and even a four-star hotel. In 2017 it will be tapped with the toes and tutus of ballet dancers from all over Memphis and the world.
On East Parkway up ahead you’re going to turn right, but before you get there see if you can find the old mansion that is home to Memphis Heritage. It’s before Parkway, on your left past the small wall and fence along the sidewalk, that buff-colored structure amongst the oaks.
Here it is: 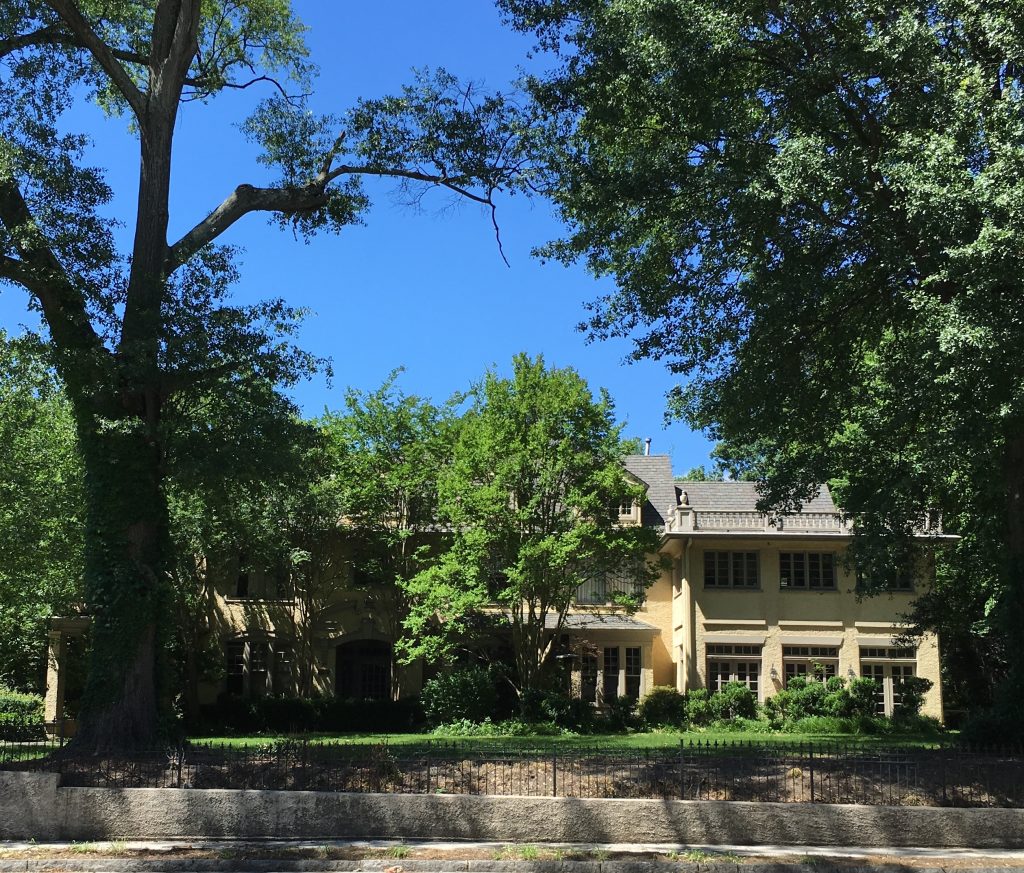 Now make your right onto Parkway. Stay right, because you’re going to turn right onto Union Avenue, and it happens upon you quickly. Stay to your right, being careful not to turn into little Monroe Avenue, and slowly, carefully, yieldingly merge onto Union heading west.
Hold onto your wheel and watch your mirrors. Despite all the thump-thumps of manhole covers, you might consider staying in the center lane. Why? Because every now and then cars in the left lane will try to turn left … without the advantage of a center median. And from the right lane you’ll have be on the lookout for cars bolting onto the roadway to your side from any number of fast food places, stores, or parking lots. You’ll probably hear your share of honking horns along the way, and you may be tempted to honk yours too sometime throughout this stretch. Oh, and don’t even think about turning left at any light – it’s against the law – see those no-left-turn signs? 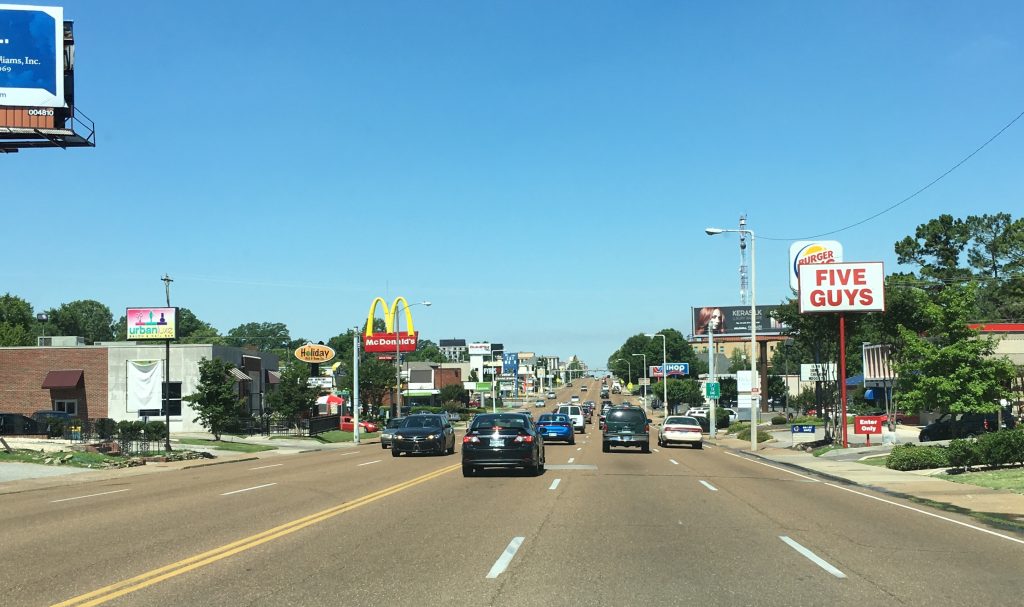 Lot’s of signage. Few sidewalks. Lot’s of car collisions. And forget about biking along this stretch of Union.
I have been critical of Union Avenue, for it’s lack of unique place and for the proliferation of fast food chains and national brand name drug stores that line the avenue. In its present state, it’s an avenue that at first glance could be Any Commercial Avenue, USA.
What I did not know, what I could not know a few months ago and so early in my Memphis discovery, was how glorious Union Avenue once was, and how it has been literally desecrated.
I did not yet know, for example, that the CVS drug store that now sits on the southwest corner of Cooper St and Union was once home to the Union Avenue Methodist Church, a beautiful building dating to 1912 on the National Registry of Historic Places, that was sold to CVS Pharmacies and bulldozed in 2011. In a sad lesson of How City Heritage Dies, its sale and eventual demolition was approved by the Memphis City Council at the time in a 10-2 vote.

(google maps image)
There is great irony in that image above, as the Memphis responds to yet another collision on Union. The purchase by CVS may have brought more tax dollars to Memphis, but at the huge cost of Memphis’ heritage.
And this is just one example of many. Now I find Union Avenue to be both exasperating and tragic, the victim of post-WWII city planning theories that focused on the automobile and the movements of residents away from downtown into the suburbs.
Union is the anti-Madison. Except for a few glaring exceptions, Madison can still boast many of the same historical, iconic structures that are common to early 20th century U.S. cities and to Memphis in particular. Same can be said for Cooper Street – it looks like it did in 1950. Central Avenue west of the Parkway looks mostly the same.
The structures along these streets may not look all that iconic, or landmark-worthy. But consider this: they have historical and cultural significance here in Memphis, important as they relate to our musical heritage, and for signifying what makes Memphis Memphis. Once they are gone they cannot be replaced.
And these are not statements against development. These aren’t statements against progress that bring more tax revenues and perhaps more jobs to a city that needs it. These are however statements against the kind of short-sighted thinking that allowed a CVS to demolish a treasure. These are statements supporting what Loeb Properties did with Overton Square, what June West does with Memphis Heritage, what I hope to do with these essays on Madison (and hopefully beyond), in advocating for the kind of development that doesn’t destroy Memphis’ sense of place, but adds more to it.
And think about it. Do we really need more of this? …

(google maps)
No, we need to bring back more of this… 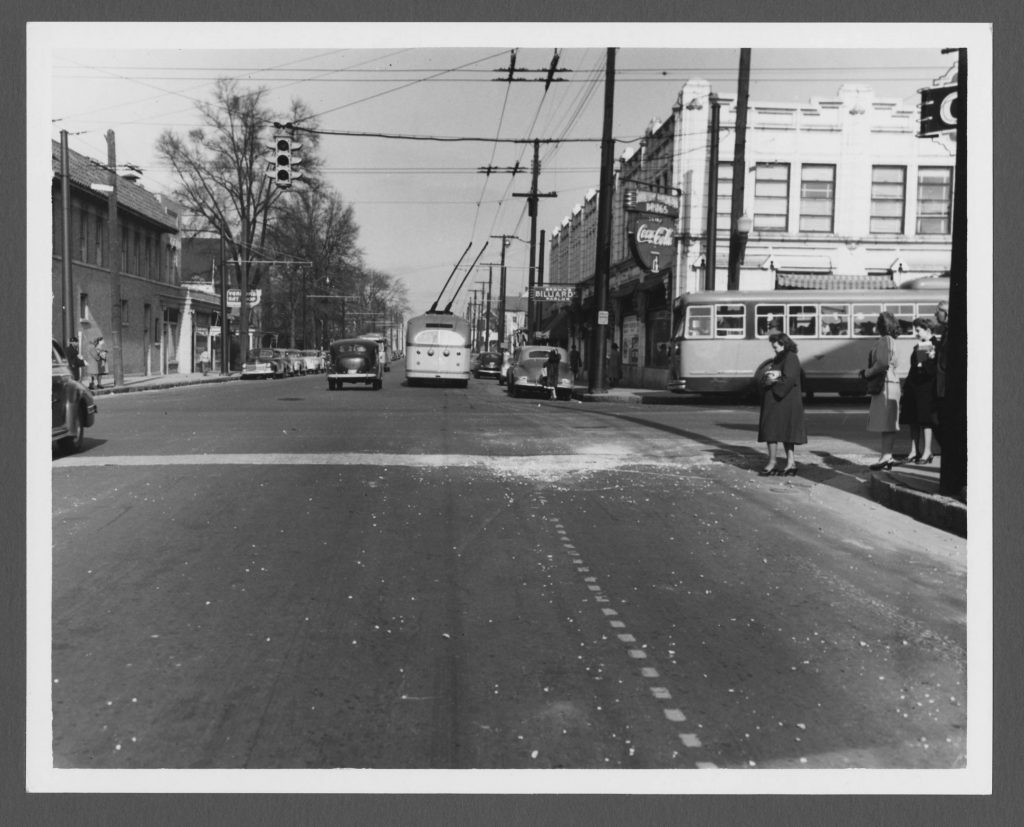 Madison and Cleveland. 1948. Memphis and Shelby County Room, Memphis Public Library & Information Center.
In shining a new light on old Madison, I hope to bring the ideas of New Urbanism into mainstream thinking. To show everyday Memphians what they might have missed the last time they were waiting for the red light at Cleveland to turn green. To bring a new understanding as to why being walkable is so important to cities; for their health, for their safety, for their prosperity.
Please join me in these efforts. And, let’s get started!